The aim of this research was to ascertain the chromosome number, karyomorphology, distribution of 5S and 18S rDNA loci, individual chromosome length, total chromosome length, DNA content, genome sizes, and phenotypic characteristics of H. sabdariffa var. sabdariffa. The chromosome number and detailed karyotype were analyzed by fluorescence in situ hybridization (FISH) using 5S and 18S rDNA probes. H. sabdariffa var. sabdariffa was tetraploid, and the chromosome number of somatic cells was 72 (2n = 4x = 72). According to FISH analysis, four 5S rDNA loci and ten 18S rDNA loci were detected. The lengths of the somatic chromosomes ranged from 3.53 to 6.88 μm, with a total chromosome length of 97.95 μm, where the total length of short arms and long arms were 37.16 and 60.79 μm respectively. The somatic cells of this species had twelve pairs of metacentric (m) and six pairs of submetacentric (sm) chromosomes. The karyotype formula was K = (2n) = 4x = 72 = 48m + 24sm. In this experiment, DNA content and genome sizes of H. sabdariffa var. sabdariffa were estimated by flow cytometry. 2C-DNA content and 2C genome size were 4.29 pg and 3338.8 Mbp, respectively. The leaf shape, leaf apex, and leaf margin were ovate, acute, and palmatipartite, respectively. The flower colour was purple and single in type. In addition, the diameter of the flower was 7.2 cm and the length of the flower eye was 1.87 cm. These results will contribute to further breeding and cytogenetic studies of H. sabdariffa var. sabdariffa.

Due to its huge economic value, making genetic improvements to H. sabdariffa var. sabdariffa is an important research area (Konar et al., 2018). Notwithstanding, cytogenetic studies are often hampered by the small size of mitotic chromosomes (Andras et al., 1999). Fluorescence in situ hybridization (FISH) and karyotyping are efficient techniques for cytogenetic studies (Anamthawat-Jónsson, 2004). FISH data can provide basic information on the ploidy level and chromosome characteristics of each species. Karyotyping is one of the prime cytological methods employed in empirical and theoretical research (Liang and Chen, 2015). Karyotype analysis of plants with a high number of chromosomes and small chromosomes is labor-intensive and difficult due to the differences in the physical features of the homologues and similarities of chromosomes in a complement (Silva et al., 2018). Moreover, genome size is a significant character of living organisms and estimates of genome size have been useful in systematic and evolutionary studies (Knight et al., 2005). However, molecular cytogenetic research of H. sabdariffa var. sabdariffa has rarely been reported. The flowers of this plant are cleistogamous, so conventional hybridization is difficult (Konar et al., 2018). Moreover, due to the fact that it is a tetraploid plant, the segregating populations need a longer period for segregation when a conventional genetic approach is used (Akpan, 2000). For this reason, molecular cytogenetic analysis is essential for accurate and efficient breeding. The objective of this study was to determine the genome sizes, DNA contents, cytogenetic characteristics, and morphological features of H. sabdariffa var. sabdariffa that will aid further research and breeding programs.

Plants (A), flowers (B), and calyces (C) of H. sabdariffa var. sabdariffa grown in greenhouse conditions.

DNA content and genome sizes were measured by flow cytometry (Partec PA, Ploidy Analyzer, Sysmex, Kobe, Japan) with five randomly collected recently expanded leaves. Leaves were cut to approximately 1 cm2 and chopped in 500 µL of extraction buffer solution (Sysmex) in a petri dish and shaken for 30 s. The resulting solution was poured through a 30-µm nylon mesh filter into a 3-mL tube and 2 µL staining buffer was added. Finally, the nuclei suspension was injected into the flow cytometry analyzer.

Healthy root tips were collected and treated with an 8-hydroxyquinoline solution for 1 ‑ 2 h at room temperature. The root tips were then washed with double-distilled water and transferred into an aceto-ethanol (1:3, v/v) solution to fix the roots overnight. After rinsing with distilled water, 70% ethanol was used to preserve the roots at ‑ 20°C until further use. For slide preparation, the root tips were washed with distilled water to remove the ethanol solution and incubated with an enzyme mixture consisting of 0.3% pectolyase (Duchefa, Haarlem, The Netherlands), 0.3% cellulose (Duchefa), and 0.3% cytohelicase (Sigma, St. Louis, MO, USA) at 37°C for 40 min. Digested root tips were transferred to a clean slide and squashed under a microscope. Finally, 20 µL acetic acid (60%) was added per slide to spread the cells and the slides were air-dried.

FISH was performed according to Lim et al. (2001) with minor modifications. Briefly, slides were pre-treated with 100 µg·mL-1 RNase A at 37°C for 40 min. After rinsing with 2X SSC and fixing with 4% paraformaldehyde for 10 min, the slides were rinsed again with 2X SSC and dehydrated in an ethanol series (70%, 90%, and 100%), followed by air-drying. The hybridization mixture contained formamide, 50% dextran sulfate, 20X SSC, 10% sodium dodecyl sulfate, herring sperm DNA, and rDNA probes. The mixture was placed in a water bath for DNA denaturation at 70°C for 5 min and then placed on ice for 15 min for fixation. Forty microliters of the mixture was added to each slide, and a cover slip was placed on the slide without bubbles. Slides were placed in a water bath for hybridization at 80°C for 5 min and then placed in a container with wet tissue paper and incubated in a humid chamber at 37°C for 16 h. Slides were then washed with 2X SSC buffer for 5 min followed by 0.1X SSC buffer for 30 min at 42°C with shaking and 2X SSC buffer for 5 min. Slides were submerged in 1X detection buffer for 5 min. Streptavidin CY3 (Invitrogen, Carlsbad, CA, USA) and anti-digoxigenin fluorescein (Roche, Basel, Switzerland) were used to detect the labeled chromosomes. Slides with cover-slips were placed in a humid chamber to incubate at 37°C for 1 h. Three jars containing 1X detection buffer were incubated in the dark in a water bath at 37°C for 5 min followed by dehydration an ethanol series (70%, 90% and 100%). Slides were then air-dried in the dark and counterstained with 4'6-diamidino-2-phenylindole (DAPI) and Vectashield at a 2:100 ratio (Vector Laboratories, Burlingame, CA, USA). Slides were examined with a model Nikon BX 61 fluorescence microscope (Tokyo, Japan). Probe signals were analyzed using ultraviolet excitation filters. Cytovision and imaging software were used to acquire images of the chromosomes with 5S rDNA and 18S rDNA signals.

For karyotype analysis, five cells showing well-spread metaphase chromosomes were selected. The length of each chromosome was measured by software, and chromosome number was determined based on the basis of short arm length order according to Lim et al. (2001). Chromosome types were classified according to the ratio of the short arm to the long arm (Levan et al., 1964). The image of the chromosomes was captured with 1000× magnification.

Flow cytometry is often used for hybrid identification and to measure nuclear DNA and genome sizes in plants (Dolezel et at., 2007). In this experiment, DNA content and genome sizes of H. sabdariffa var. sabdariffa were estimated by flow cytometry. According to our study, 2C-DNA content and 2C genome size were 4.29 pg and 3338.8 Mbp, respectively (Table 3 and Fig. 2), which was almost 32-fold larger than those of the angiosperm Genliea margaretae Hutch with the smallest genome size (Pellicer et at., 2010). Lattier at et. (2019) reported that the range of 2C-DNA values of various cytotypes of H. syriacus was from 4.55 to 8.98 pg and that H. hamabo (2C=4.06 pg)was also closer to H. syriacus. 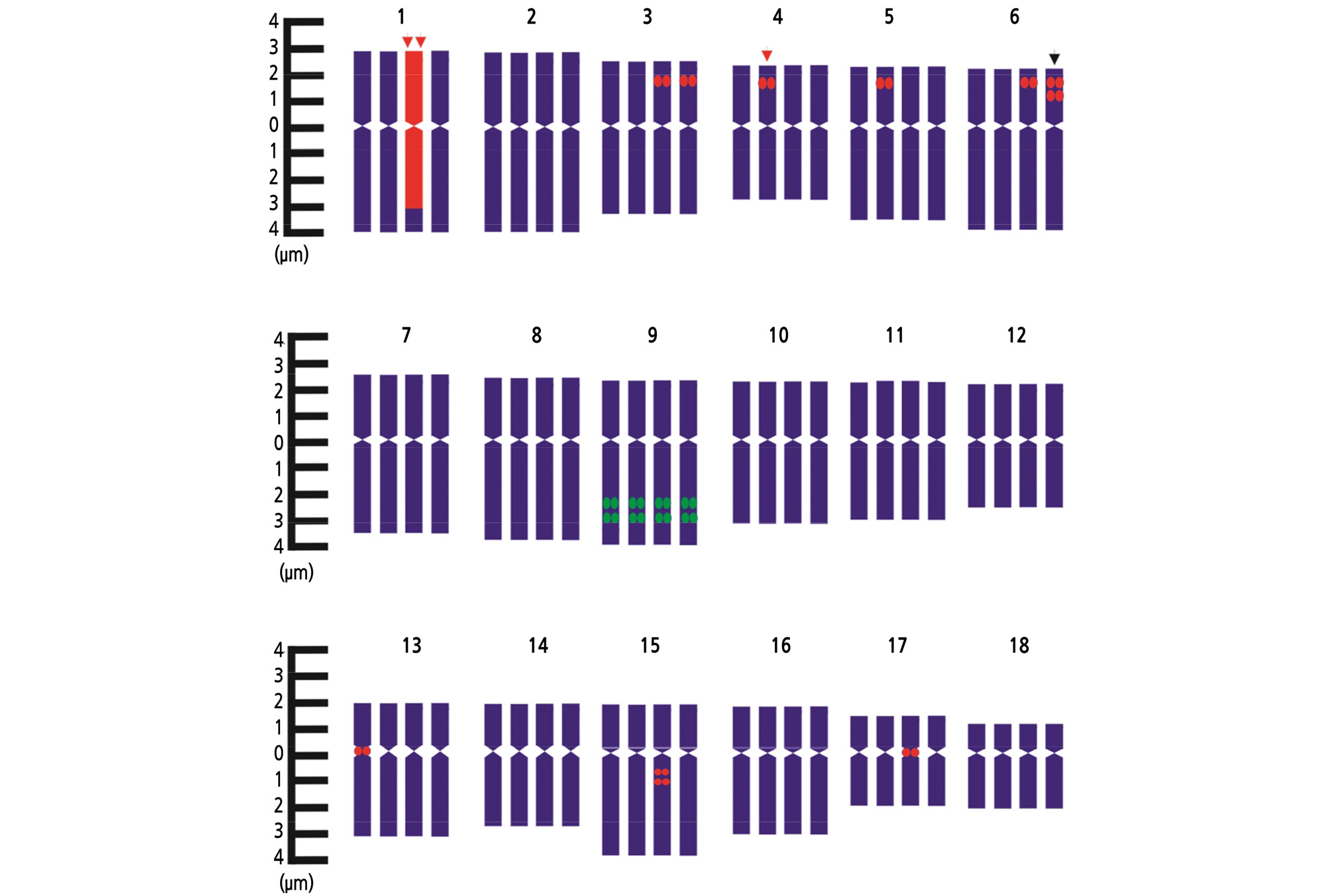 zArrangement of the short arm's length in descending order.

This paper reported the phonotypic and cytogenetic analysis of H. sabdariffa var. sabdariffa. The phonotypic and cytogenetic characteristics such as the chromosome number, chromosome morphology, chromosome distribution of 5S and 18S rDNA, location of 5S and 18S rDNA signals on short and long arms, and karyotype, have been presented. Chromosome 1 exhibited 18S probe signals along the entire chromosome except the telometric region; this was a special characteristic and deserves further research. This study will help to provide a base for further research and contribute to the breeding of H. sabdariffa var. sabdariffa.

Declaration of Competing Interest This research is ready to be reported in this publication was supported of Agriculture, Food and Rural Affairs. I hereby disclose all of my conflicts of interest and other potentially conflicting interests, including specific financial interests and relationships and affiliations relevant to HORTICULTURAL SCIENCE AND TECHNOLOGY.