‘Fuji’ apple occupies 80% of the apple growing area in Korea. This cultivar has several advantages including high quality and long shelf life. However, its fruit color has been hindered by inadequate light interception in the tree, temperature, and nitrogen and soluble solids contents (Vestrheim, 1970; Choi et al., 2000). In order to improve fruit color, an ideal tree shape and adequate fertilization are required. Most growers try to improve fruit color using management practices such as hand defoliation, removal of water sprouts, training, and reflective film mulching to increase light interception (Jackson et al., 1971; Choi et al., 2000). However, these methods are labor-intensive, which can increase the cost of production. Therefore, it is necessary to develop defoliants that can reduce labor (Yim et al., 2000).

In previous studies on defoliants, 2,3,5-triiodobenzoic acid (TIBA), an anti-auxin growth regulator, was used to improve fruit coloration in ‘Fuji’ and ‘Jonathan’ apples (Kim and Yun, 1971). However, it was banned due to food safety concerns. Later, abscisic acid (ABA) and its synthetic intermediate STC-4771 were applied to ‘Fuji’ and ‘Jonathan’ apples for defoliation. However, their defoliation effect was inconsistent (Kamuro and Sakai, 1995; Yim et al., 2000). The chelate compounds Cu-EDTA and Fe-EDTA are very effective defoliants and are being used as a foliar spray to advance the period of digging and to protect apple trees from freezing injury on apple nursery stocks in autumn (Knight, 1983; Faby, 1988).

The present study was undertaken to investigate the effectiveness of two types of chelate compounds, Cu-EDTA and FE-EDTA, as an individual or a mixed foliar spray, on defoliation and fruit coloration of ‘Fuji’/M.9 apple.

Eight-year-old ‘Fuji’/M.9 apple trees cultivated at Chungbuk Agricultural Research and Extension Services in Cheongju, Korea were used in this study. Cu-EDTA (Ethylendiaminete-traacetic acid copper disodium salt tetrahydrate, Junsei Chemical Co., Ltd, Japan) and Fe-EDTA (EDTA ferric sodium salt trihydrate, 98.0%, Samchun Pure Chemical Co., Korea) chelate compounds were used as a foliar spray. The control (sprayed with distilled water) and treatments were as follows: (1) 1% Cu-EDTA, (2) 3% Cu-EDTA, (3) 1% Fe-EDTA, (4) 3% Fe-EDTA, and (5) 1% Cu-EDTA + 1% Fe-EDTA. A total of 18 trees with similar vigor and fruiting were selected (3 trees per treatment). Only one main branch of each tree was used for each treatment. These trees were sprayed on September 29th, 2009 at 30 days before harvest. During spraying, trees were isolated from each other using waterproof cloth to prevent contamination from other treatment solutions.

Changes in the Chelate Compound-Treated Leaves

Leaves were classified into fruit cluster leaves, bourse shoot leaves, and true leaves. The defoliation rate was measured every 2 days after the treatments. The photosynthetic rate was measured with a photosynthesis analyzer (LC pro+, ADC Bio Scientific Ltd., Hoddesdon, Herts, UK) using three leaves with similar leaf size selected from each tree. The light-emitting diode (LED) light intensity of the photosynthesis analyzer was adjusted to a photosynthetic photon flux density (PPFD) of 900 µmol·m-2·s-1 and the temperature of the measuring block was adjusted to be equal to field temperature. Leaf chlorophyll content was determined using a chlorophyll meter (SPAD-502, Minolta, Japan).

Characteristics of harvested fruit were investigated on October 30th, 2009. Ten fruit was sampled randomly from each main branch. Fruit coloration was determined by measuring three spots of the stem end of each apple using a chromatograph (CR-300, Minolta, Japan). Firmness of the peel and flesh was measured using a durometer (FHM-5, Takemura, Japan) with a Ø5 mm2 firmness-needle. Soluble solids content was measured with a digital refractometer (Digital refractometer PR-101, Atago, Japan) using juice obtained by crushing and squeezing the flesh. Acidity was analyzed by squeezing the flesh, filtering the juice, adding 20 mL of distilled water to 5 mL of the juice, and titrating the mixture with 0.1 N NaOH. Data were obtained by converting the amount of NaOH consumed until the discoloring point to the amount of malic acid. Anthocyanin content was assessed by collecting 10 peel discs using a cork borer (Ø1.1 cm), dipping them in 20 mL of anthocyanin extraction liquid [MeOH (85):0.1 N HCl (15)] in darkness at 4°C for 24 h, and measuring with a 530 nm UV/visible spectrophotometer (Ultrospec 4000, Pharmacia Biotech, Sweden).

In this study, leaves of investigated ‘Fuji’/M.9 apple trees were classified into fruit cluster leaves, bourse shoot leaves, and true leaves. After treatment with the two chelate compounds, the defoliation rate of ‘Fuji’/M.9 apple trees increased significantly compared to that of the control for all types of leaves (Fig. 1). Particularly, Cu-EDTA treatments resulted in higher defoliation rates than Fe-EDTA treatments regardless of leaf type. Ben-Yehoshua and Biggs (1970) reported that Cu-EDTA can produce a larger amount of ethylene than Fe-EDTA, which induces more defoliation. Regarding the effect on leaf type, Cu-EDTA markedly defoliated all types of leaves and the mixed treatment of 1% Cu-EDTA with 1% Fe-EDTA also defoliated all types of leaves, which was similar to the effect of the individual Cu-EDTA treatments. Fe-EDTA remarkably defoliated fruit cluster leaves (Fig. 1A). However, it had less effect on bourse shoot leaves and true leaves (Fig. 1B, C). In addition, the photosynthetic rate of true leaves was the highest in the 1% Fe-EDTA treatment but the lowest in the 3% Cu-EDTA treatment (Fig. 2). Photosynthetic rates in other treatments were in the mid-range. Leaves assimilate photosynthates (Taiz and Zeiger, 2002), and excessive defoliation can lead to a reduced photosynthetic rate for fruit enlargement, reduced soluble solids content, and reduced fruit coloration (AAES, 1985; Srisook et al., 2016; Matsumoto et al., 2017). Therefore, to improve fruit quality, it is better to remove mainly fruit cluster leaves which have a relatively lower photosynthetic rate compared to leaves in other positions (Choi et al., 2000). For this reason, a foliar spray with Fe-EDTA is considered to be better as a defoliant for ‘Fuji’/M.9 apple trees. 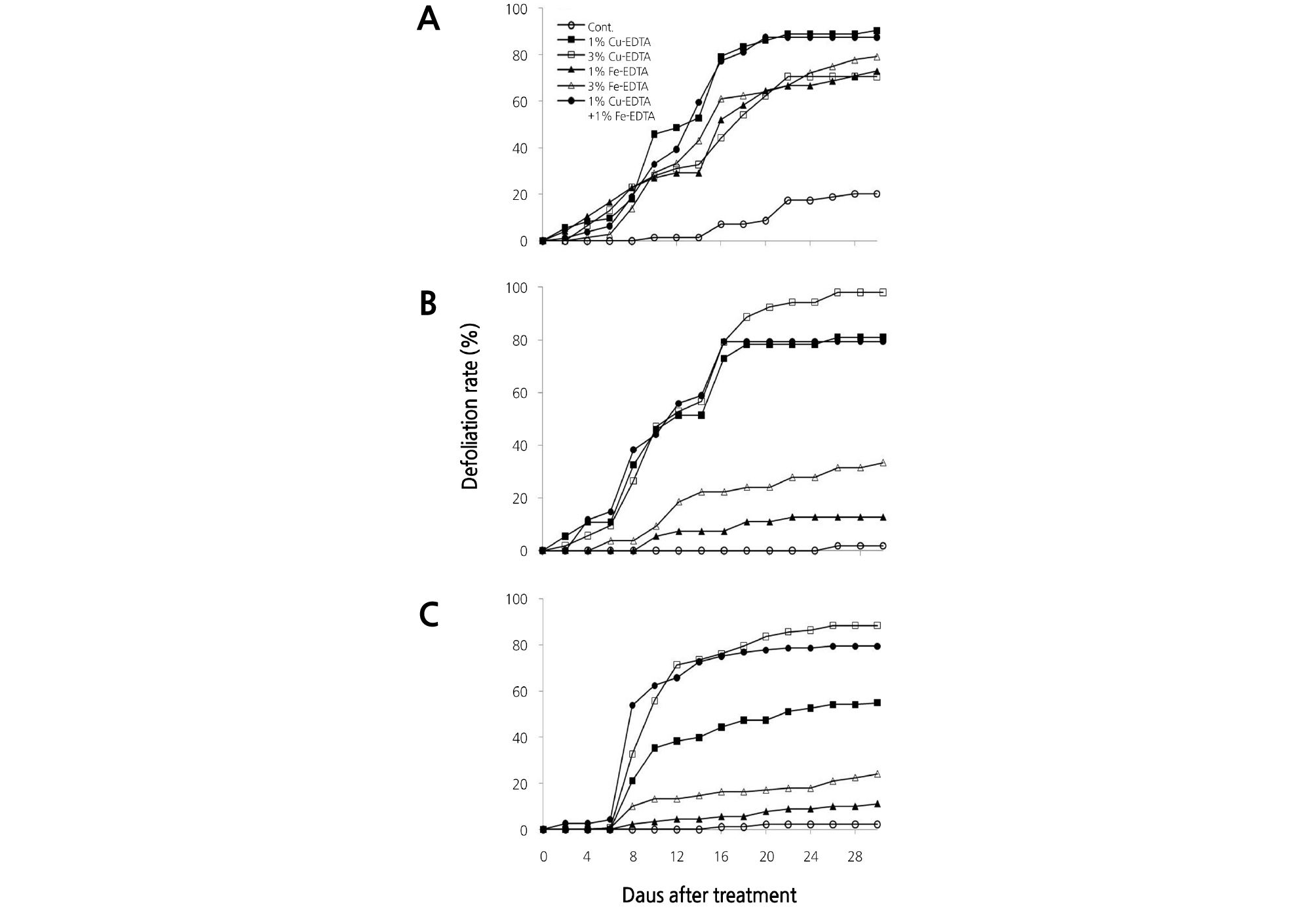 Photosynthetic rates of true leaves of 8-year-old ‘Fuji’/M.9 apple trees after the application of a Cu-EDTA and/or Fe-EDTA foliar spray. Bars represent standard error of means from three replications.

Fig. 3 shows changes of the specific color difference sensor value (SCDSV) measured by the chlorophyll meter in true leaves at 16 days after the Cu-EDTA and/or Fe-EDTA treatments when the defoliation rate reached almost the maximum in all treatments. None of the chelate treatments significantly decreased the leaf chlorophyll content compared to the control. In deciduous fruit trees, nitrogen and photosynthates in leaves should be transferred to stems of the trees before leaf shedding for regrowth in the following year (Millard, 1996; Furze et al., 2019). In this study, the foliar spray with chelate compounds resulted in defoliation without any significant change in leaf chlorophyll content in comparison with the control. This suggests that defoliation might have happened rapidly without the natural process of leaf senescence. Consequently, the transfer of nitrogen and photosynthates from leaves to the stems might be insufficient (Guak et al., 2001).

Table 1 shows the fruit quality of ‘Fuji’/M.9 apple treated with the chelate compounds. Fruit weight was the highest (at 232.9 g) in the group treated with 1% Fe-EDTA and the lowest (at 198.8 g and 192.8 g) in the groups treated with 1% Cu-EDTA and 1% Cu-EDTA + 1% Fe-EDTA, respectively. In deciduous fruit trees, nutrients produced in the leaves generally move to the fruit during the maturation period (Loescher et al., 1990). These nutrients have a direct effect on the development of the fruit (Kang and Ko, 1976; Lee and Kang, 1996) since they play a critical role in determining the enlargement of fruit before harvest (Ferree and Palmer, 1982; Roper and Loescher, 1987; Park, 2002). Thus, fruit weight decreased in trees treated with Cu-EDTA and those treated with 1% Cu-EDTA + 1% Fe-EDTA due to the effect of these treatments on photosynthesizing leaves. In these treatments, all fruit cluster leaves, bourse shoot leaves, and true leaves were much more defoliated compared to those in other treatments. On the other hand, the 1% Fe-EDTA treatment resulted in a similar defoliation rate for fruit cluster leaves to that of the other treatments but a lower defoliation rate for true leaves and bourse shoot leaves. This has a direct effect on fruit growth (Choi et al., 2000). Furthermore, the 1% Fe-EDTA treatment resulted in a higher photosynthetic rate for true leaves than in the other treatments. This might have affected fruit weight. Soluble solids content and acidity were not significantly different (p > 0.05) among the treatments, consistent with reports of Yim and Lee (1999) and Choi et al. (2000), showing that defoliation did not have an obvious effect on soluble solids content or acidity (Parker et al., 2015).

Anthocyanin contents in peels of harvested fruit were higher in the chelate compound treatments than those in the control, although they were not significantly different among the treatments (Table 2). Fruit coloration, examined using a chromatograph, was the lowest (15.33) for CIE a* value and the highest (14.63) for CIE b* value in the control, meaning poor coloring. On the other hand, fruit of the chelate compound-treated groups had better coloration than the control fruit because of the defoliation and improved light interception in the treated groups (Jackson et al., 1971). These results are consistent with several previous reports showing that defoliation can improve fruit coloration (Bae and Lee, 1995; Choi et al., 2000; Yim et al., 2000; Nam et al., 2016). Among the treated groups, Fe-EDTA resulted in slightly higher red coloration (CIE a* value) than Cu-EDTA and Fe-EDTA + Cu-EDTA. This was because Fe-EDTA extensively defoliated fruit cluster leaves, allowing for greater light interception of fruit, whereas it defoliated less bourse shoot leaves and true leaves, which are involved in photosynthesis in the late enlargement period of fruit (Table 2 and Fig. 1). As a result, soluble solids were more highly accumulated in the fruit and used for the production of anthocyanin (Pirie and Mullins, 1976). Regarding the Fe-EDTA concentration, 3% Fe-EDTA induced higher red coloring but lower fruit weight compared to 1% Fe-EDTA. This might be due to the fact that although these two treatments defoliated fruit cluster leaves similarly, 1% Fe-EDTA defoliated nearly half the amount of bourse shoot leaves and true leaves compared to 3% Fe-EDTA.

Taken together, foliar spray of chelate compounds (Cu-EDTA and/or Fe-EDTA) at 30 days before harvest was effective in defoliating fruit cluster leaves, thus affecting light interception of ‘Fuji’/M.9 apple trees. However, due to an increased defoliation rate of bourse shoot leaves and true leaves, which are involved in photosynthesis during the late period of fruit growth, Cu-EDTA significantly reduced fruit weight, soluble solids content, and peel coloration compared to Fe-EDTA. A mixed application of 1% Cu-EDTA with 1% Fe-EDTA caused a similar defoliation rate as that of the individual Cu-EDTA treatments and it also significantly reduced fruit weight and peel coloration. The 3% Fe-EDTA treatment resulted in higher peel coloration but lower fruit weight compared to 1% Fe-EDTA. Consequently, the 1% Fe-EDTA treatment was the most effective for improving fruit quality and coloration of ‘Fuji’/M.9 apple as it induced higher defoliation of fruit cluster leaves but lower defoliation of bourse shoot leaves and true leaves.

This work was supported by Korea Institute of Planning and Evaluation for Technology in Food, Agriculture, Forestry (IPET) through Agri-Bio Industry Technology Development Program (or Project), Funded by Ministry of Agriculture, Food and Rural Affairs (MAFRA) (315003-5).

Ben-Yehoshua S, Biggs RH (1970) Effects of iron and copper ions in promotion of selective abscission and ethylene production by citrus fruit and the inactivation of indoleacetic acid. Plant Physiol 45:604-607. doi:10.1104/pp.45.5.604