Breeding of the Mini-Type Phalaenopsis Cultivar ‘Yellow Green’, Having Deep-yellow Flowers with a Red Lip

A new Phalaenopsis cultivar, ‘Yellow Green’, was bred at Kangsan Orchid, Korea. The new cultivar has small, deep-yellow flowers with a red lip, and was introduced by artificial crossing of the Phalaenopsis cultivar ‘Sogo Pride F-1016’ and the Phalaenopsis cultivar ‘Tzu Ching Glint’. The elite individual KS-752-1, later named as ‘Yellow Green’, was selected among 300 individual progenies through over three years (2008-2010) of intensive selection for excellent vegetative and flowering characteristics. In the 1st (2011-2013) and 2nd (2014-2015) years of breeding, characteristic analysis was performed through stability and uniformity tests. ‘Yellow Green’ has flowers that are deep-yellow (RHS#: 5A) with a red lip (RHS#: N74A) and are small in size, measuring 4.6 cm in length and 4.9 cm in width. The flowers are light-green at the beginning and gradually turn to deep-yellow. Also, the flower buds are produced easily. ‘Yellow Green’ flowers are a compound raceme type, suitable for pot cultivation. Its leaves grow horizontally and are about 17.5 cm in length and 6.2 cm in width. This cultivar is characterized by the absence of genetic variation, fast in vitro propagation, and vigorous growth that facilitates cultivation. This cultivar was registered (Reg.#:6268) with the Korea Seed & Variety Service (KSVS) on July 18, 2016, and the plant breeder's right is currently owned by the Kangsan Orchid Company, Korea.

Phalaenopsis cultivars include interspecific hybrids as well as intergeneric hybrids between the orchid genera Doritisand Phalaenopsis (Dor x Phal), and new Phalaenopsis varieties are being continuously developed by the horticulture industry (Pablo, 2008). The importance of Phalaenopsis orchids to the horticultural industry has raised the issue of how to protect the variety rights or intellectual property rights of new plants (variety, cultivar, or hybrid), as it is easy to reproduce an orchid plant by clonal propagation based on tissue culture (Kwon et al., 2018). However, long-term in vitro propagation of plants results in somaclonal variation, which impedes the creation of true to type plants during clonal propagation. Thus, early detection of somaclonal variants is essential for growers to minimize economical loss (Lee et al., 2017). Large hybrid cultivars of Phalaenopsis are not easy to cultivate because the varieties are not genetically uniform. However, clonal varieties have been developed and popularized, making high-quality production easier (Ichihashi and Mii, 2006). Moreover, flowering and shipping can be easily controlled by temperature management. Since Phalaenopsis also has a variety of flower shapes, colors, and a long coronary period, their demand is continuously increasing. In 2016, the total cultivated area was 40 ha and total production was valued at 20,028 million Korean won (MAFRA, 2017). However, most of the current cultivars are made in Taiwan and the payment of royalties is becoming a burden. Moreover, flavonoid formation was found to be favored in PLB-derived plantlets under all lighting system (Kwon et al., 2018) and in Phalaenopsis Blume, interspecific and intergeneric hybridization has long been used for breeding superior hybrids (Bolanos-Villegas et al., 2008).

The aim of this study was to explore means of replacing imported seed and opening up the Chinese market by cultivating Phalaenopsis ‘Yellow Green’, which is well adapted to the domestic environment, easy to grow, and produces small, yellowish flowers favored in the domestic and overseas markets. 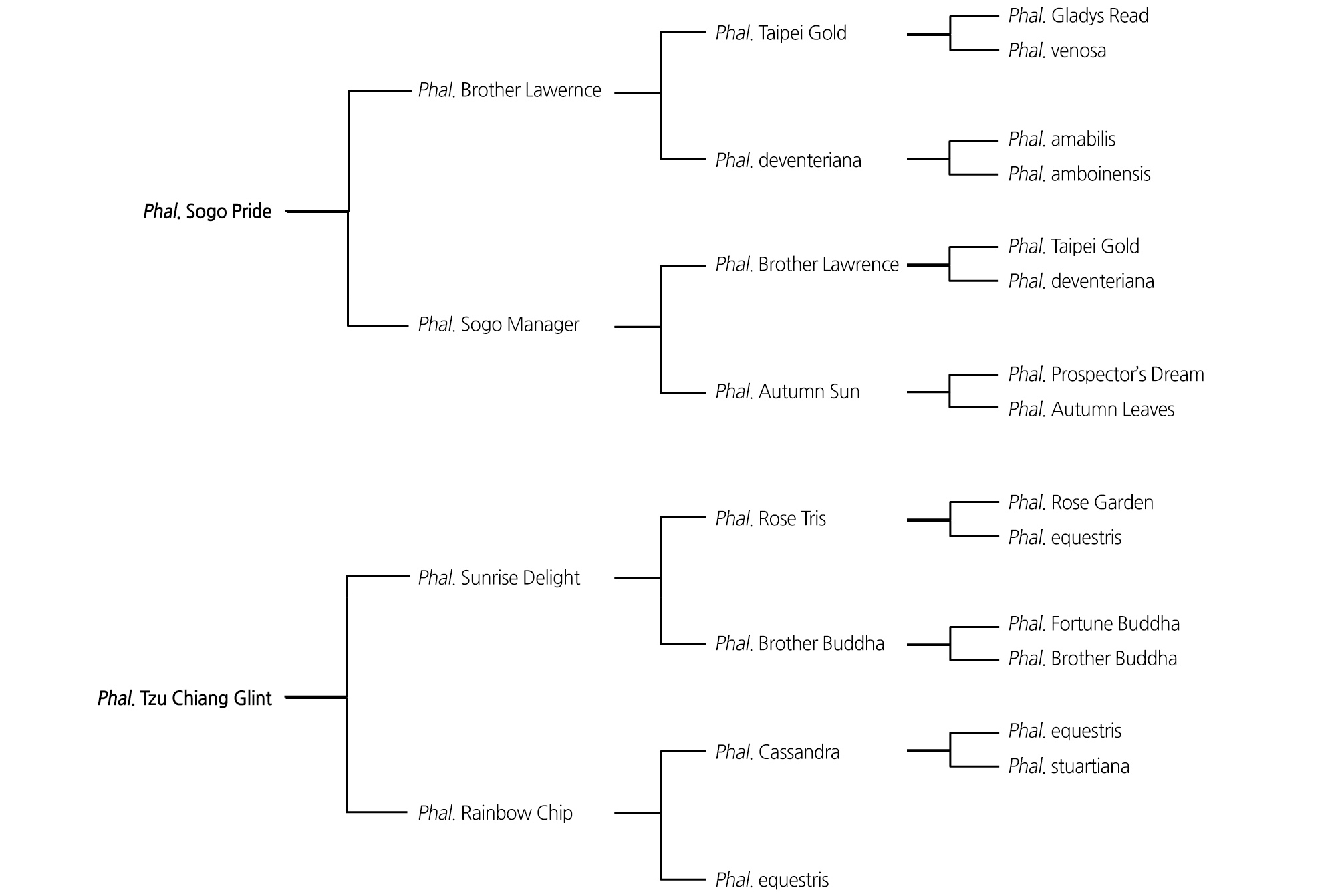 After artificial crossing for six months, the ripe pods were disinfected and then sown onto the culture medium for Phalaenopsis (Hyponex 3 g·L-1, peptone 4 g·L-1, sucrose 30 g·L-1). The germinated seedlings were grown in vitro, and seedlings with poor growth, such as leaf deformities, were removed, and fast growing, healthy seedlings were selected. In April 2008, 300 seedlings with excellent vegetative growth characteristics were selected and cultivated in vitro in the greenhouse. In 2010, KS-752-1 individuals with excellent vegetative growth characteristics, strong disease tolerance, and bovine flowers with bright-yellow color were selected from among the flowering individuals (Fig. 1). Selected individuals were used for tissue culture. In 2011 and 2014, the first- and second-generation growth characteristics were observed over two years, and the stability and uniformity of the varieties were confirmed. The final varieties were registered under the cultivar name of ‘Yellow Green’. The female parent Phalaenopsis ‘Sogo Pride F-1016’ with small, yellow-colored flowers, similar to ‘Yellow Green’, was used as the female control cultivar to measure the characteristics of growth and flowering. In 2014 and 2015, extending over two generations, the characteristics of growth and flowering were investigated according to protocols described in the manual for agricultural investigation of the Rural Development Administration (RDA, 2003) and the examination procedure recommended by the Korea Seed & Variety Service (KSVS, 2004). The reproductive rate was expressed as the percentage of protocorm-like bodies (PLB) occurring in the leaf culture and the low temperature treatment for flowering was maintained at 25/18°C (day/night).

‘Yellow Green’ was monitored for its growth characteristics over a period of seven years and individuals were selected with robust growth and the ability to be resilient in the summer. Therefore, its cultivation and quality management, which are important horticultural characteristics, are very easy. In particular, because the inflorescence is somewhat short, induction and transportation of the pedicle is easier (Table 1 and Fig. 4). These characteristics are needed to develop a new market for Phalaenopsis in the future. Flowering in Phalaenopsis is generally induced at a temperature of 25°C or lower, with differences between species (Ichihashi and Mii, 2006). If the flowering induction period is long, the maintenance required at specific temperatures results in higher air conditioning costs and consequently a higher unit price. The low temperature treatment period required to induce flowering of ‘Yellow Green’ is 87.3 days, which is similar to the 83.9 days of the control variety (Table 3).

Table 3. Other characteristics of the new Phalaenopsis cultivar 'Yellow Green'

‘Yellow Green’ has vigorous vegetative growth and the plant is robust. Therefore, cultivation management is easier considering the general cultivation environment required for the species. The required culture conditions are 25°C, 70% humidity, and a light intensity of about 270 µmol·m-2·s-1. However, at the flowering stage, the development of flower color is unstable at low and extremely high temperatures. Therefore, to produce desirable flowers, ‘Yellow Green’ should be cultivated at 20°C with a light intensity of 700-800 µmol·m-2·s-1 during differentiation and development. Currently, Phalaenopsis cultivar is almost clone, and the ability to reliably induce PLB and its growth characteristics in mass production is a very important factor in the profitability and sustainability of these varieties (Been, 2003). The characteristics of ‘Yellow Green’ through the second generation of vegetative reproduction are excellent in mass productivity, have uniform plant height and degree of flowering, and no mutation occurs during cultivation (Table 3 and Fig. 4).

The application for breeding protection (application number 2015-413) under the Seed Industry Act for the new variety ‘Yellow Green’ was submitted on June 11, 2015, tested for breeding on July 18, 2016 (Registration No. 6268), and received breed protection from July 18, 2016 to July 17, 2036. It is currently cultivated and shipped by Kangsan Orchids located in 55-38, Daejeojungang-ro 71beon-gil, Gangseo-gu, Busan, Republic of Korea.