Salicylic acid (SA) is an important signal transduction molecule that helps plants overcome external stress conditions. Drought stress can strongly impact plants during cultivation. In this study, we investigated the effects of pretreating Chinese cabbage seedlings with exogenous SA during drought stress through physiological and biochemical analyses. The study lasted for 39 days, including a period of 23-day during which Chinese cabbage seedlings were pretreated with SA. Plants were pretreated three or six times with SA (10-4 M) or left untreated (control), and subjected to a 12-day drought period. Leaf samples were harvested before (day 0) and on days 3, 6, 9, and 12 of the drought period. Malondialdehyde (MDA) content, photosynthesis rate, chlorophyll fluorescence, total chlorophyll content, and antioxidant enzyme (catalase, ascorbate peroxidase, glutathione reductase) activities were determined during the drought period. Pretreatment with SA led to enhanced drought tolerance in Chinese cabbage seedlings. Pretreating seedlings six times was found to be more efficacious than three times. SA pretreatment reduced MDA synthesis and prevented leaf rolling and leaf scorching. Additionally, SA pretreatment preserved the photosynthetic apparatus and counteracted the reduced activity of antioxidant enzymes. These results demonstrate that pretreatment with exogenous SA protects Chinese cabbage seedlings from oxidative stress and promotes their growth. We thus conclude that pretreatment with exogenous SA can enhance drought tolerance in Chinese cabbage seedlings.

Drought stress influences various environmental factors and has been recognized as an critical factor in agricultural productivity (Yang et al., 2010; Sun et al., 2015; Vurukonda et al., 2016; Lee and Park, 2017). In plants exposed to drought stress, transpiration rates are decreased to maintain intracellular humidity levels, resulting in stomata closure. Absorption of CO2, the backbone of photosynthesis, is inhibited by stomata closure, which in turn is activated by abscisic acid (ABA)- mediated regulation of ion flux (Zhu, 2002; He et al., 2012; Khan et al., 2013a). Proton flux is interrupted by inhibiting photosynthesis, resulting in the formation of reactive oxygen species (ROS) (Mignolet-Spruyt et al., 2016). Plants have evolved various methods to reduce the damage incurred by ROS (Ramel et al., 2012). The activation of antioxidant enzymes like catalase (CAT) in the ascorbate-glutathione (ASC-GSH) cycle is essential for the defense response (Kono and Fridovich, 1982; Hernandez et al., 2000). When oxidative stress exceeds antioxidant capacity, ROS accumulate and cause damage to plants (Møller and Sweetlove, 2010). As such, there is a need to better understand the mechanism by which plants utilize stress defense signaling molecules like ethylene, jasmonic acid (JA), salicylic acid (SA), and Ca+ (Swarbreck et al., 2013; Khan and Khan, 2013b).

Among the different signaling molecules in plants, SA is an important molecule that is known to play a role in stress response (Raskin, 1992; Arfan et al., 2007; Lee et al., 2018). SA signaling regulates stress by influencing photosynthesis (Khan et al., 2012). In response to abiotic stress and the accumulation of ROS, SA inhibits the activity of CAT, leading to induction of H2O2 (Kono and Fridovich, 1982). The induced H2O2 is used as a signaling molecule to activate antioxidant mechanisms that reduce damage caused by ROS (Gechev et al., 2002; Møller and Sweetlove, 2010). Researchers have studied the effect of SA on plant growth for several decades (Hayat et al., 2010; Kazemi et al., 2010). However, some reports have demonstrated the negative effects of using high concentrations of exogenous SA (Pancheva et al., 1996; War et al., 2011). Therefore, it is important to determine optimal concentrations of exogenous SA that should be applied and to monitor the duration during which antioxidants are induced.

The Chinese cabbage (Brassica campestris L.) cultivar named ‘Chooseol’ was used in this study. The seedlings of Chinese cabbage were cultivated in a growth chamber (25°C, relative humidity 60%, 12/12h (light/dark), 200 µmol m-2·s-1) for 39 days. Samples (0.1 g) were collected from the upper side of the sixth leaf of seedlings and stored at ‑70°C.

Drought stress was induced after salicylic acid treatment of 28-day-old seedlings by stopping irrigation for 12 days.

0.1 g leaf sample was used to measure MDA content. The degree of lipid peroxidation in plant tissues was measured by applying Metwally’s method (Metwally et al., 2003). The MDA content of plants was quantified following reaction with thiobarbituric acid. Using a mortar and pestle, 5 mL of 0.1% (w/v) trichloroacetic acid was added to the homogenized samples. 2 mL of the homogenized sample was scooped up and centrifuged for 5 minutes at 10,000 g. After centrifugation, 0.4 mL of the supernatant was taken and 1.6 mL of 25% (v/v) trichloroacetic acid was added. The mixture was then heated up to 95°C for 15 minutes, after which the reaction was stopped immediately. After centrifuging the mixture at 10,000 g for 5 minutes, the absorbance of the supernatant was measured at 532 nm and 600 nm using a UV-Visible Spectrophotometer (UV-2450, Shimadzu, Kyoto, Japan). The MDA content was determined using a molar extinction coefficient of 155 mmol-1·L-1·cm-1.

The content of total chlorophyll in plant tissue was measured using 0.1 g of leaf sample by modifying Arnon’s method (Arnon, 1949). The sample was ground using a mortar and pestle and 10 mL of 80% acetone solution was added. The sample was then wrapped in a foil and stored for 7 days at 4°C in the dark. Next, the absorption coefficient of the chlorophyll extracted acetone solution was measured at 645 nm and 663 nm using a UV-Visible Spectrophotometer (UV-2450, Shimadzu, Kyoto, Japan). The chlorophyll content was determined by using the following equation.

Photosynthetic rates of plant leaves were measured using a Portable Photosynthesis System (LI-6400, Biosciences, USA). Relative humidity was measured as 50 ‑ 60%, CO2 flow rate as 400 mmol/s, chamber temperature at 20°C and light quantity as 200 µmol·m-2·s-1. The upper side of the sixth leaf from a seedling was used to measure photosynthetic rate.

2 mL of 25 mM potassium phosphate buffer (pH 7.8) containing 0.4 mM EDTA-4H, 1 mM ascorbic acid, and 2% (w/v) polyvinylpolypyrrolidone were added to a powdered sample and homogenized. The homogenized sample solution was placed in a 2 mL microcentrifuge tube using a micropipette and centrifuged at 15,000 g for 20 minutes. The supernatant obtained was used as a coenzyme extract to measure the antioxidant activities of the enzymes catalase (CAT; EC 1.11.1.6), ascorbate peroxidase (APX; EC 1.11.1.11), and glutathione reductase (GR; EC 1.6.4.2). Total protein was quantified by the Bradford colorimetric method using the coenzyme extract (Bradford, 1976).

CAT enzyme activity analysis was performed using the method of Aebi (1974). 0.95 mL of the reaction buffer [50 mM potassium phosphate buffer (pH 7.0), 10 mM H2O2] was added to a cubic cell and absorbance at 240 nm was stabilized at 25°C for 30 seconds using a UV-Visible Spectrophotometer (UV-2450, Shimadzu, Kyoto, Japan). 0.05 mL of the crude enzyme extract was then placed in the cubic cell and the change in absorbance was measured for 1 minute.

CAT activity was quantified by the reduction of H2O2 observed upon addition of CAT, and 1 unit was defined as the amount of reduction obtained by 1 µmol enzyme per minute.

The activity of APX was calculated as the change in the oxidation rate of AsA used during the reaction of APX, and 1 unit was defined as the amount of reduction obtained by 1 µmol enzyme per minute.

GR enzyme activity was analyzed by modifying the method of Foyer and Halliwell (1976). 0.85 ml of the reaction buffer [25 mM potassium phosphate buffer (pH 7.8), 0.06 mM NADPH] was added to a cubic cell and 0.1 mL of the crude enzyme extract was added. It was stabilized at 340 nm for 1 minute 25°C. 10 mM GSSG 0.05 mL was then added in the cubic cell and the change in absorbance was measured for 1 minute.

The activity of GR was calculated as the change in oxidation rate of NADPH used by GR during reaction, and 1 unit was defined as the amount of decrease caused by 1 µmol of reactant per minute.

All experiments and analyses were conducted in a completely randomized design with 3 replicates with individual seedlings for each treatment. Statistical analysis was performed by SAS (version 9.4; SAS Institute, Inc., Cary, NC, USA). Duncan’s multiple range test was used to determine the differences between means (p < 0.05).

Following 12 days of drought stress, the phenotypes of seedlings were different in response to all treatments. The SA concentration used was established by previous studies, since high concentrations can cause toxicity and low concentrations may not have effects on oxidative stress tolerance (Fariduddin et al., 2003; War et al., 2011; Khan et al., 2015). In the control seedlings, all the leaves were dry, while those treated six times with SA exhibited a phenotype that was less affected by drought stress (Fig. 1). The phenotype depended on the number of treatments and showed an improvement as the number of treatments increased from three to six.

In the control, the seedlings started to die under drought stress after 9 days at a death rate of 66.7%. Interestingly, death was delayed and the death rate was decreased by treating with SA. This might be the result of a physiological response to SA that increases alternative pathway under stress conditions in plants (Moynihan et al., 1995). Notably, death did not occur until 12 days in the six times treated seedling group (Table 1). The change in RWC in the plants caused by the drought condition occurred internally, showing a form in which the leaves of the plants sagged. In more severe cases, the leaves withered.

Table 1. Death rate (%) of Chinese cabbage seedlings during drought stress conditions. Seedlings were treated with 0.1 mM SA either three or six times before stopping irrigation. Water was sprayed as a control

zDifferences in the data indicated by the same letters are not statistically significant (p < 0.05)

MDA Content Depends on the Number of SA Treatments 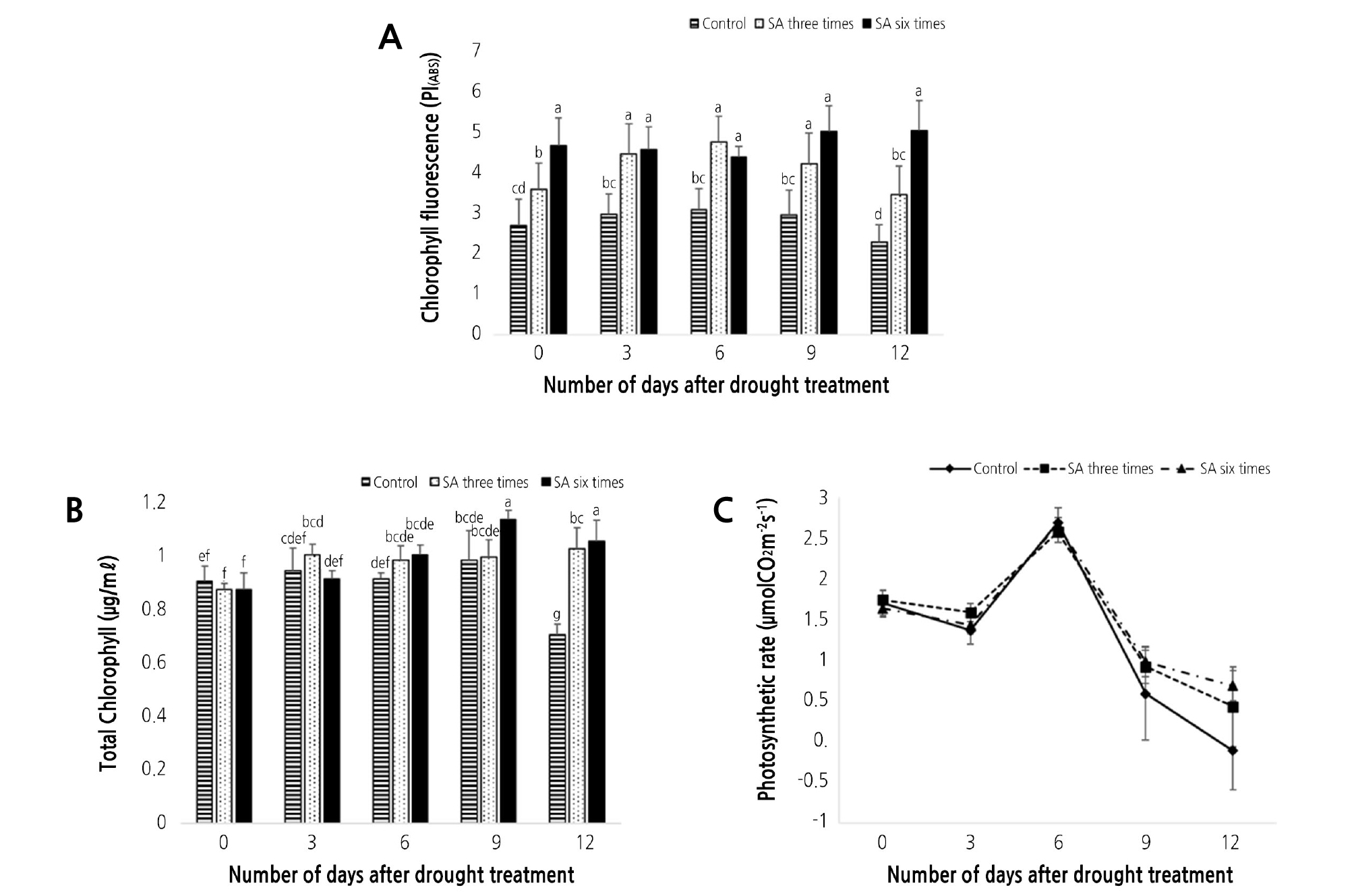 The photosynthetic performance of the photosystems, as determined by chlorophyll fluorescence, decreased in the untreated SA group (Fig. 4A). A similar trend was also observed in the analysis of the total amount of chlorophyll (Fig. 4B).

The photosynthesis rate, which is highly related to plant growth and is a result of internal physiological activity of plants, started to decrease slightly after irrigation was stopped (Fig. 4C) (Schurr et al., 2006). This is presumed to be the result of ABA-mediated closing of the stoma to prevent water loss under drought stress conditions, due to interrupted irrigation (Miyashita et al., 2005). Later, the photosynthesis rate increased up to 6 days after irrigation was stopped (Fig. 4C). This is presumed to be the mechanism by which plants gain energy through reprogramming, equilibrating, and maximizing the photosynthesis rate after survival under drought stress conditions (Chaves et al., 2009).

Our investigation of the photosynthetic apparatus revealed that SA treatment was effective in maintaining and improving the efficiency of photosynthesis. Furthermore, we showed that when plants were placed under drought stress conditions, they underwent reprogramming to maintain their physiological growth.

Changes in Antioxidant Enzyme Activities Depend on SA Treatment

The present study analyzed the antioxidant enzymes catalase (CAT), ascorbate peroxidase (APX), and glutathione deductase (GR), all of which are known to protect plant cells from ROS-induced damage (Møller, 2001). In the absence of SA treatment, CAT activity decreased up to 6 days after stopping irrigation and then increased afterwards. This trend was similar in the two SA treated groups. However, in the treated groups, the extent of decrease in activity was lower and the day of lowest activity was delayed (Fig. 5A).

Additionally, treatment with SA decreased the activity of CAT on day 0. This is presumably because SA initially inhibits the activity of CAT by enhancing the accumulatio of H2O2, which may be used as a signal transduction agent to activate antioxidant mechanisms (Landberg and Greger, 2002; Janda et al., 2003).

This work was supported by the 2017 sabbatical year research grant of the University of Seoul.