Citrus is a major fruit crop produced in tropical and subtropical regions around the world. Citrus annually produces 146 million tons of fruit from a cultivated area of 7.2 million hectares worldwide. Sweet orange cultivars account for approximately 60% of annual citrus production (FAO, 2018). In 2017, citrus produced over 0.6 million tons of fruit in the arable land of over 20,000 hectares in Korea. The entire production amounted to approximately 0.83 billion USD (www.krei.re.kr). Citrus fruit is an important source of nutrition for humans due to its high contents of vitamin C, citric acid, and other functional compounds, including citrus-specific flavonoids such as hesperidin and tangeretin (Benavente-García and Castillo, 2008; Iranshahi et al., 2015). Despite the tremendous extent and value of citrus production, most citrus varieties have been selected from natural hybridizations and somatic mutations (e.g., bud sport and nucellar mutants), not from systematic and targeted breeding programs (Talon and Gmitter, 2008). Citrus is considered the most difficult crop for developing new varieties through conventional breeding. Unfavorable factors for conventional breeding in citrus include large plant size, long juvenile stage, self- and cross-incompatibility, pollen and/or ovule sterility, high level of heterozygosity, and apomictic nucellar embryony (Donmez et al., 2013).

In Korea, systematic citrus breeding programs have been in operation since the Citrus Research Institute, National Institute of Horticultural and Herbal Science, was established in 1992. More than 30 citrus varieties have been developed from bud sport mutants, nucellar mutants, and genetic hybridizations by breeders at governmental institutes and breeding companies as well as private breeders. Development of new citrus varieties will greatly increase in the near future due to citrus breeding programs in government and company sectors. However, reliable technologies for identifying Korean citrus varieties that protect breeders’ rights and guarantee the quality of nursery plants are not yet established. Therefore, in this study, we report the development of polymorphic microsatellite makers to identify citrus varieties bred in Korea.

The 53 polymorphic microsatellite markers used in this study 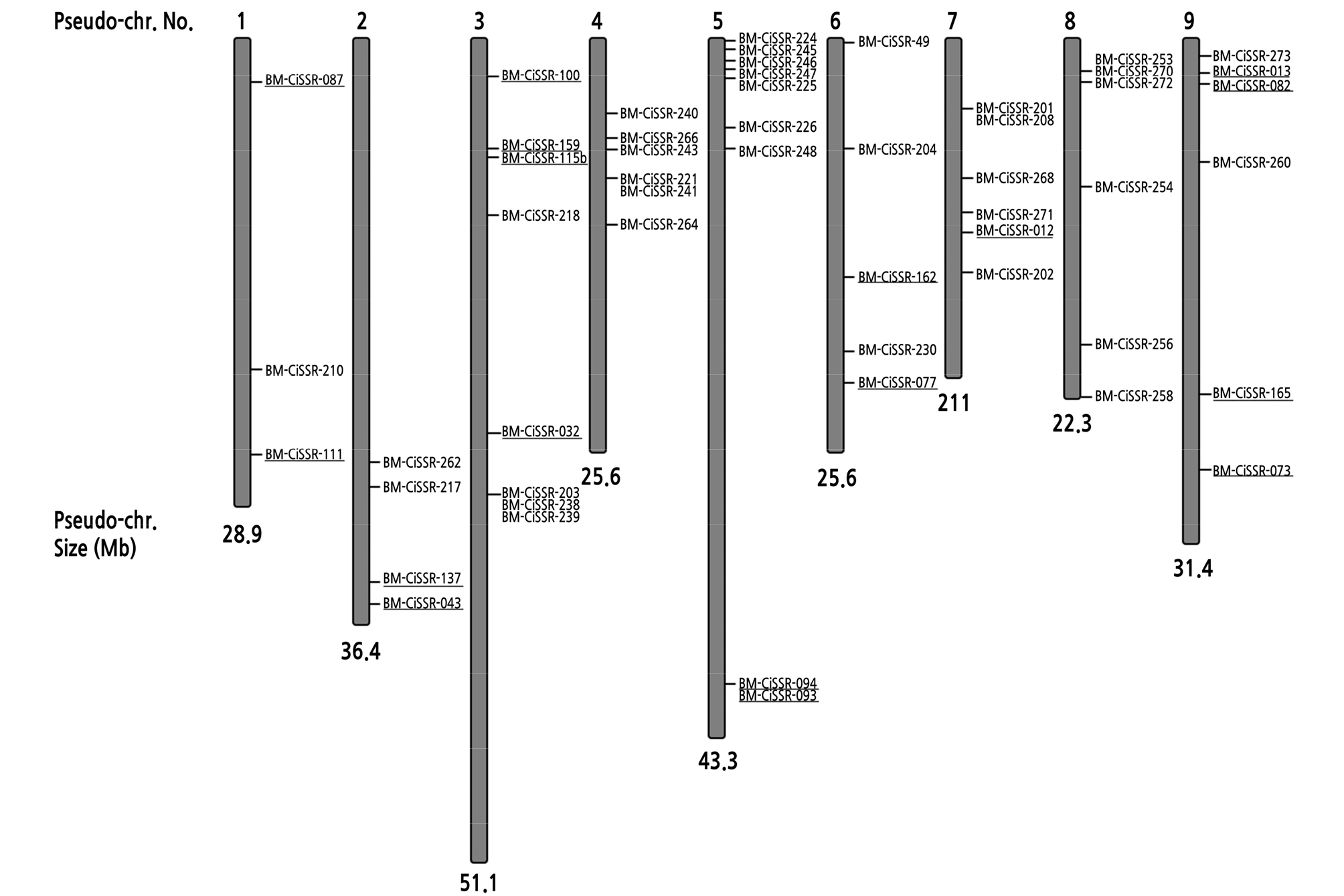 Up to now, 34 citrus varieties were developed from bud sport mutants, nucellar mutants, and traditional genetic hybridizations by breeders at governmental institutes and breeding companies as well as private breeders in Korea (Table 2). Fifty-three microsatellite markers were applied to an available 32 Korean citrus varieties to determine their genotypes. Genetic characteristics of microsatellite loci based on the genotype analysis of 32 accessions are summarized in Table 3. A total of 245 alleles, ranging from 2 (BMCi-SSR084) to 11 (BMCi-SSR012) per locus, were observed among the 32 citrus accessions, with an average of five alleles per locus. Major allele frequency (MAF) varied from 0.22 (BMCi-SSR012) to 0.98 (BM-CiSSR-245). The average genetic diversity (GD) value was 0.53, ranging from 0.03 (BM-CiSSR-245) to 0.87 (BMCi-SSR012), and average polymorphism information content (PIC) value was 0.47, from 0.14 (BM-CiSSR-224) to 0.85 (BMCi-SSR012). The average observed heterozygosity (HO) was 0.47, with the lowest value in BM-CiSSR-245 and BM-CiSSR-270 (0.03) and the highest value in BM-CiSSR-262 (1.00).

SS, sample size; NOBS, number of observations; availability is defined as 1-OBS/n, where OBS is the number of observations and n is the number of individuals sampled; NG, genotype number; MAF, major allele frequency; NA, number of alleles; GD, genetic diversity. GD, often referred to as expected heterozygosity, is defined as the probability that two randomly chosen alleles from the population are different; observed heterozygosity (HO) is simple proportion of heterozygous individuals in the population.; PIC, polymorphism information content.

A total of 245 alleles derived from the 53 polymorphic microsatellite loci were used to evaluate genetic relationships among the 32 varieties. A UPGMA dendrogram was constructed based on the genetic similarity matrices among the accessions. Fig. 2 illustrates the results of the cluster analysis based on microsatellite data. The resulting dendrogram revealed that the accessions used in the analysis could be distinctly classified into lemon and non-lemon groups. The microsatellite markers clearly discriminated most of the citrus varieties developed in Korea, except for ‘Tamnaneunbong’ (TNB), ‘Saebyeolbong’ (SBB), and ‘Suneat’ (SNE), which originated from nucellar offspring (TNB and SBB) and bud sport mutation (SNE) of Citrus hybrid ‘Shiranuhi’ (Table 2). Nucellar embryos develop from somatic embryos derived from maternal nucellar tissue surrounding the sexual embryo sac. This process is a kind of apomixis and is widely found in many citrus varieties. The offspring derived from nucellar embryony in citrus possesses the same genetic constitution as the female parent (Kepiro and Roose, 2007; Zhang et al., 2018). Our results indicate that somatic mutants, including nucellar offspring, originating from an identical parental plant have identical or very similar genetic constitutions to each other. 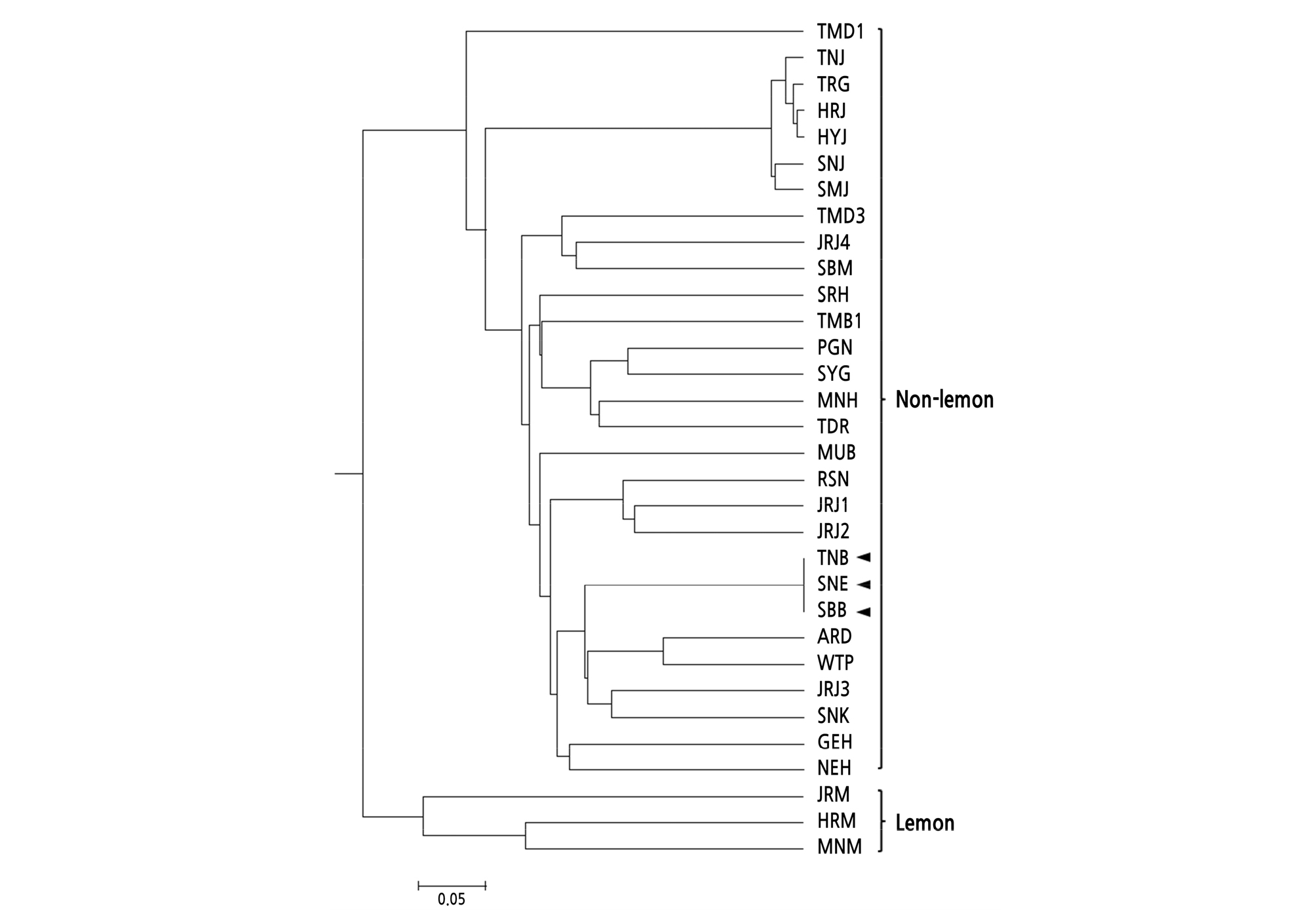 In conclusion, we developed 53 polymorphic microsatellite markers covering nine pseudochromosomes of citrus and applied them to the identification of citrus varieties bred in Korea. The microsatellite markers clearly discriminated most of the citrus varieties, whereas somatic mutant varieties that were derived by nucellar embryony or bud sport mutation from a parental plant showed identical genotypes on all loci investigated due to identical or very similar genetic constitution. The microsatellite markers developed in this study will be a useful molecular tool to protect breeders’ rights and guarantee the quality of nursery plants in the citrus industry.