‘Shine Muscat’, recently introduced into Korea, is a seedless grape (Vitis vinifera) with an edible skin and high sugar content. Despite the rapid increase in its cultivation area, there is no research on how to apply plant growth regulators (PGR) for seedlessness and floral cluster thinning of ‘Shine Muscat,’ which is the basis of this study. Five different PGR treatment methods were applied. Streptomycin (SM) at 200 mg·L-1 was applied 7 days before blooming in most of the treatment groups, and an untreated control was included. Primary treatments were applied 1-3 days after full bloom (DAFB) and involved the application of 12.5 or 25.0 mg·L-1 gibberellic acid (GA3) and 2.5 or 5.0 mg·L-1 thidiazuron (TDZ) or 5 mg·L-1 forchlorfenuron (CPPU), and one treatment involved a second application of 200 mg·L-1 SM. Secondary treatments were applied 12-15 DAFB and involved the application of 12.5 or 25.0 mg·L-1 GA3 or no PGR treatment. Three different flower cluster treatments were applied. Flower clusters were thinned by hand to 3, 4, and 5 cm. Fruit quality was investigated through the measurement of the seedlessness rate, cluster weight, berry weight, berry length, berry diameter, soluble solids contents, acidity, and aroma. The results showed that the use of SM is advantageous for seedlessness when applied 7 days before blooming, and fruit quality differed between the CPPU and TDZ treatments. Floral cluster thinning to 3 and 4 cm resulted in higher quality grapes compared with thinning to 5 cm. We hope these findings will contribute to establishing standards for producing seedless ‘Shine Muscat’ grapes with high fruit quality.

In the 1990s, South Korea’s domestic grape (Vitis spp.) production increased substantially, but it decreased after the signing of the Free Trade Agreement (FTA) in the 2000s because of increased imports and because of the government project supporting the closure of orchards. Since the FTA was signed, grapes are imported from Chile, the United States, and Peru. Consequently, consumer trends have changed. The main import varieties include ‘Thompson Seedless’, ‘Crimson Seedless’, ‘Red Globe’, and ‘Black Sapphire’. The common features of these varieties are that they are seedless grapes with edible skin and high sugar content.

‘Shine Muscat’ is a diploid table grape breed from Japan, with characteristics similar to those of European grapes (Yamada et al., 2008). It is relatively new in Korea but gaining increasing popularity over the traditional ‘Campbell Early’ grapes because of its higher sweetness. ‘Shine Muscat’ seedless grapes can be produced commercially by applying gibberellic acid (GA3) to flower and fruit clusters in full bloom and 10 - 15 days after full bloom (DAFB), respectively (Yamada et al., 2008). Its large yellow-green berries are juicy and crisp, and the skin is edible. Compared to 2018, the area of cultivation of ‘Shine Muscat’ grapes increased by 79% in 2019, accounting for 12.9% of the total area of grape cultivation, and it is expected to surpass the area of ‘Muscat Bailey A’ and become the third largest area after ‘Campbell Early’ and ‘Kyoho’ (Yoon et al., 2018).

In contrast to the rapid increase in the cultivation area of ‘Shine Muscat,’ farmers are finding it difficult to grow this variety due to the lack of basic cultivation techniques, which have been established for other traditional grape cultivars. There is no specific method used to dispose of seedlessness, and the type or timing of the plant growth regulator (PGR) treatment used for seedlessness, such as using in accordance with the same method of ‘Kyoho.’

Four PGRs were used in this study, including streptomycin (SM), GA3, forchlorfenuron (CPPU), and thidiazuron (TDZ). Streptomycin is not technically a PGR, but it is used like a PGR in grape cultivation. It plays a role in increasing the period of primary GA3 treatment by suppressing the development of the ovule (Kimura et al., 1996). GA3 is a natural plant hormone that contributes to preventing fruit cracking and is currently being used for the induction of seedlessness in several grape varieties, such as ‘Kyoho’, ‘Muscat Bailey A’, and ‘Tamnara’ (Kimura et al., 1996; Jung et al., 2017). CPPU and TDZ are phenylurea-type cytokinins and play a role in berry enlargement (Reynolds et al., 1992).

In addition, there is also no standardized cluster thinning technique in ‘Shine Muscat’. By leaving the flower cluster longer than 5 cm during the floral cluster thinning stage, too much labor is needed for berry thinning later, and by the time of harvest, cluster weight is more than 1,000 g. It has been reported that the higher the amount of fruit in apples (Malus domestica) and peaches (Prunus persica), the lower the sugar content of the fruit (Awad et al., 2001; Garcia-Pallas et al., 2001), and in ‘Kyoho’ grapes, the greater the cluster weight, the lower the soluble solids content (SSC) of the fruit (Shim et al., 2007). In addition, it is not possible to maintain uniform fruit quality without flower cluster thinning, as the greater the cluster weight, the greater the difference is grow bigger in SSC between berries in the upper section (top) and lower section (tip) of the cluster (Kim et al., 2015).

In this study, we applied five different PGR treatment methods to examine the effect of PGR types, amounts, and timing on the induction of seedlessness, berry development, and quality at harvest time. In addition, we tested the effects of floral pruning methods on fruit quality in order to provide growers with standardized production criteria for ‘Shine Muscat’ grapes.

This experiment was conducted on ‘Shine Muscat’ grapes (Vitis vinifera) from farms located in Jain-myeon (Gyeongsan) and Modong-myeon (Sangju), Gyeongsangbuk-do, Korea. Grapes were grown in rainproof cultivation without heating. The distance between the plants was 2.5 m, and the inter-row spacing was 3 m.

All berries in the PGR treatment groups were equally thinned to 4 cm. Except for PGR applications and floral cluster thinning, cultivation was carried out in the same manner as conventional cultivation.

Aroma was analyzed using the Heracles II Flash gas chromatography-based electronic nose (Alpha MOS, USA). Crushed samples were placed in a vial and heated, and aroma was based on the material’s retention time.

One way analysis of variance (ANOVA) were conducted. And statistical analysis of the experimental results was performed using the IBM SPSS Statistics 23 program (SPSS, Inc.). The inter-processing significance verification was verified at the 0.05% level through the Duncan's multiple range test.

When comparing the CPPU (group 1) and TDZ (group 3) treatment, the cluster weight and berry weight were greater in the TDZ (960.03 and 18.41 g, respectively) treatment, than those of the CPPU (797.68 g and 14.53 g, respectively) treatment (Table 1). It was also shown that TDZ had a significant effect on the increase in berry diameter (Fig. 1, Table 1). For no secondary treatment, the SSC was the highest at 19.22°Brix, but the berry weight was 13.45 g, slightly lower than the 14 - 16 g yield aim of the ‘Shine Muscat’ grapes. The grapes harvested in Sangju showed similar characteristics to those harvested in Gyeongsan (Table 2). 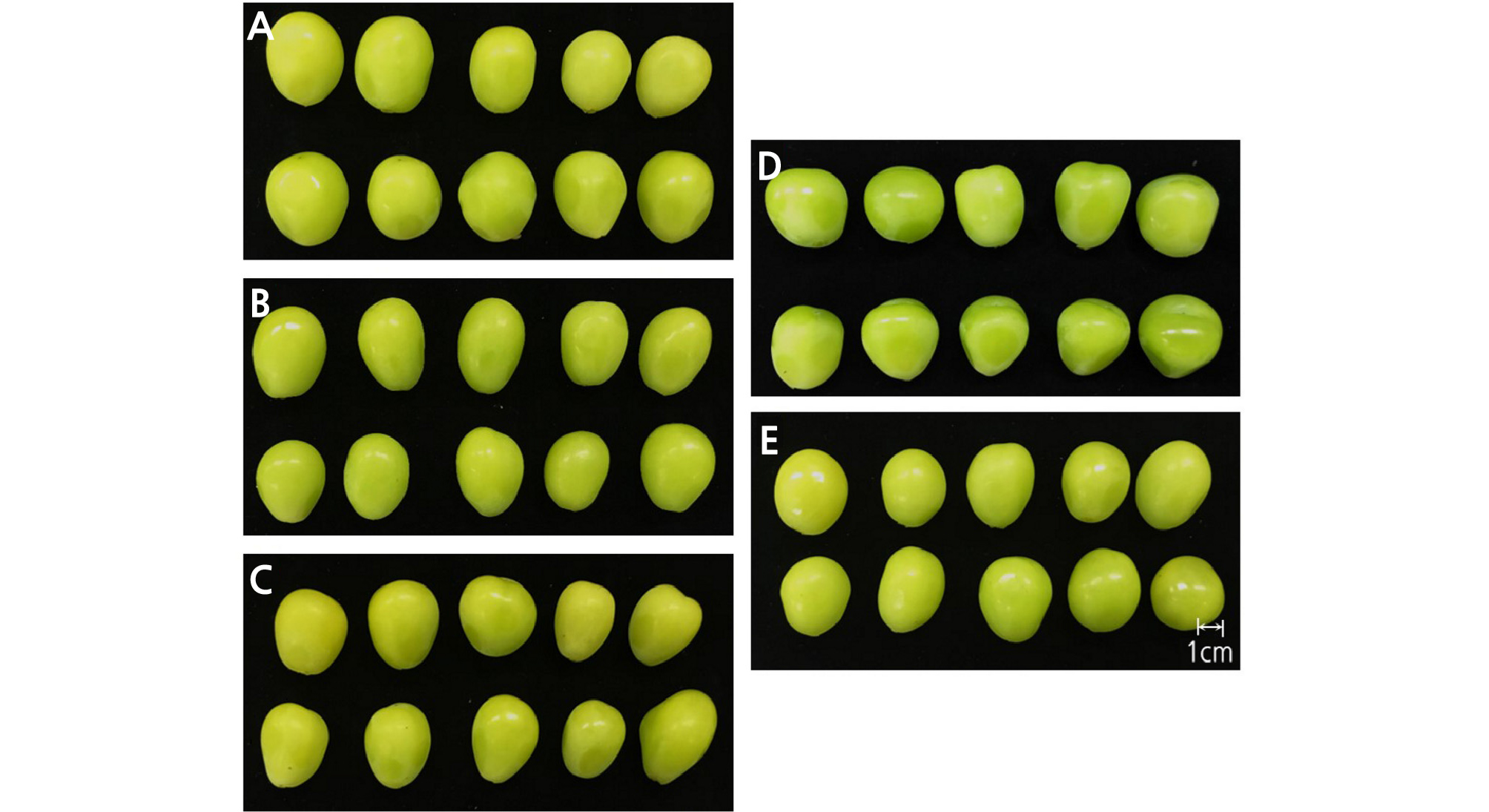 The aroma analysis by the electronic nose showed that hexanal and 2-hexen-1-ol were higher in the TDZ treatment (group 3) than in the CPPU treatment (group 1) (Fig. 3). Hexanal and 2-hexen-1-ol are clear, colorless liquids known to smell of freshly cut grass (Ömür-Özbek and Dietrich, 2008). Principal component analysis separated these aroma components by the CPPU and TDZ treatments (Fig. 4).

Principal component analysis based on ‘Shine Muscat’ aroma characteristics with CPPU and TDZ treatments at harvest time. Components were separated by CPPU and TDZ.

zFloral cluster thinning was conducted 7 days before full bloom.yDifferent letters within columns of each area are significantly different by Duncan's multiple range test at p ≤ 0.05.

The average berry weight of fruit harvested in Sangju was 16.1, 15.2, and 15.8 g for the 3, 4, and 5 cm treatment groups, respectively, showing no significant differences between each other. There were also no significant differences in the berry diameter, and although significant results were produced in the berry length between the 4 cm treatment group and the rest of the treatments, the difference was minimal. SSC was 19.0°Brix at 3 cm, 18.9°Brix at 4 cm, and 18.5°Brix at 5 cm, and tended to decrease gradually as the cluster weight increased. The longer the remaining flower cluster, the greater the SSC of the berries of the top and tip (Figs. 5 and 6, Table 4) compared with those in the middle regions of the clusters.

Table 4. Comparison of soluble solids content (SSC) among the fruit from different lengths of floral cluster thinning by hand in 'Shine Muscat' grape at harvest time in Gyeongsan and Sangju city, Korea

The fruit quality characteristics of ‘Shine Muscat’ grapes treated with the different PGR treatments showed that the use of TDZ led to the largest berry size, while the SSC was the highest following the CPPU primary treatment with no secondary treatment, but the low berry weight resulted in poor commercial properties. The berries were also elliptical-shaped when subjected to CPPU treatment, and large and long when TDZ was used. The SSC was lower in the TDZ treatment group, but it seems that this can be overcome by further slowing down the harvest season or leaving shorter flower clusters. Based on the aroma analysis, the CPPU treatment is effective to reduce the smell of grass associated with hexanal and 2-hexen-1-ol.

The average number of berries in the 3 cm treatment group in Gyeongsan and Sangju was 37.2 and 37.8, respectively, but there was a significant difference in cluster weight of more than 100 g, and berry weight was also remarkably different, at 12.8 and 16.0 g, respectively. In particular, the SSC difference was over 5°Brix (Tables 3 and 4).

It has been reported that as the leaf area decreases, the quality of fruit decreases (Park et al., 2011). In ‘Kyoho,’ heavy pruning was associated with excessive economic losses caused by poor fruit quality, such as delayed coloring and reduced sugar content. In this context, the different characteristics between the 3 cm treatment on plants grown in Gyeongsan and Sangju can be attributed to the poor tree strength in the corresponding group in Gyeongsan (Song and Ko, 1999).

The cluster weight of the 5 cm treatment group was similar between Gyeongsan (981.4 g) and Sangju (958.2 g), but the SSC was 15.4°Brix and 18.5°Brix, and the berry weight was 13.7 and 15.8 g, respectively, being significantly lower in Gyeongsan, which can also be attributed to the poor tree strength. However, the tendency of berries located lower in the cluster to have a lower SSC than upper berries was also evident in Gyeongsan (Table 4).

The longer the length of the flower cluster, the more excessive the cluster weight was, and the sugar level tended to decrease slightly. In particular, it is thought that the difference in the SSC between berries of the top and tip will increase as the cluster weight increases, making it difficult to produce uniform-quality grapes.

In summary, prior to the PGR treatments and floral cluster thinning, the consumer's preference should be identified first, and high-quality grapes should be produced by a 3 or 4 cm floral cluster thinning. For producing 100% seedlessness grapes, it is advantageous to treat with SM 7 days before blooming. In addition, if the secondary treatment is not performed, the berry size does not increase properly, which makes the product less commercially viable. Comparing CPPU to TDZ, the TDZ treatment was more effective for increasing berry size, which greatly increases the berry weight and cluster weight, but results in a lower SSC. To obtain large-sized berries by TDZ treatment, it is thought that quality fruit can be produced by adjusting the length of the remaining flower cluster to 2.0 - 2.5 cm and the number of target berries to lower than 30.

This work was supported by Korea Institute of Planning and Evaluation for Technology in Food, Agriculture and Forestry (IPET) through Export Promotion Technology Development Program, funded by Ministry of Agriculture, Food and Rural Affairs (MAFRA) (No. 617070-5).