Temperatures worldwide have been rising due to global warming. The Korean grapevine (Vitis labruscana) cultivars are sensitive to high temperature during the vegetative growing period and are challenged with various physiological disorders, resulting in decreased production and poor quality of fruit. This study was conducted to identify genes that are differentially expressed in response to high temperature to help elucidate the mechanism of tolerance to temperatures in grapevines. ‘Kyoho’ grapevine leaves were maintained at 25°C and 35°C for 24 h in a plastic house and then used for transcriptome analysis by RNA-seq. More than 92 million transcripts were used for transcriptome analysis, with a total length of 7 billion bp and an average length of 89.6 bp; an average of 85.5% of the data were used in the final analysis. Investigation of differentially expressed genes (DEG) in response to high temperature discovered 243 induced genes and 378 inhibited genes. The selected DEGs were related to metabolism (49 genes), cell structure (22 genes), and molecular functions (15 genes). The selected DEGs clustered in the pathways of carbohydrate metabolism, amino acid metabolism, and the citrate cycle in the KEGG metabolic pathway. Among the selected DEGs, we selected the top 10 highly up-regulated and the top 10 down-regulated genes and confirmed their expression levels by reverse transcription quantitative PCR. At high temperature, the top 10 genes, including BCL-2-associated athanogene 6, heat shock protein 21, HAD superfamily, and subfamily IIIB acid phosphatase, showed induced expression, whereas the other 10 genes, including APS reductase3, ribosomal protein S7e family protein, and ribosomal protein L2 family, showed inhibited expression pattern. This is consistent with the results from the transcriptome analysis. We propose that these genes can potentially be used for the development of molecular markers to elucidate defense mechanisms against high temperature stress, and for breeding grapevine varieties tolerant to high temperature.

While cool conditions are favorable for berry skin coloration, a continuous high temperature generally inhibits the accumulation of pigments such as anthocyanins due to changes in physiological activities, and expression of genes related to metabolism in the skin of grape berries (Kliewer and Torres, 1972; Mori et al., 2005; Matsumoto et al., 2007; Mori et al., 2007; Kim et al., 2015).

The expression of numerous genes is modified in grapevines under high temperature due to the activation of various mechanisms including the expression of defense related genes, metabolism-related genes, and transcription factors (Liu et al., 2012). Temperature affects many photosynthetic and molecular processes, and temperatures above 40°C are reported to reduce photosynthesis in most plants (Saxe et al., 2001; Bita and Gerats, 2013). Stress caused by high temperatures on leaves has a direct impact on the quality of grape berries (Guidoni et al., 1997; Koyama et al., 2012; Zha et al., 2016).

Understanding the molecular mechanisms of berries and vine leaves in response to high temperature is important for developing novel cultivars of grapevines tolerant to temperature changes, as well as to benefit grape production by regulating the expression of genes related to stable berry development regardless of climatic changes. It is therefore necessary to elucidate the mechanism of complex responses in leaves of grapevines exposed to high temperature in order to help maintain stable berry development and good ripening. This study was undertaken to analyze the transcriptome, and to select differentially expressed genes (DEG) and validate their expression in leaves of ‘Kyoho’ grapevines exposed to high temperature.

For transcriptome analysis, leaves of grapevine (Vitis labruscana) cultivar ‘Kyoho’ were collected from vines grown in a temperature gradient greenhouse in the Agricultural Research Center for Climate Change, Jeju, Korea. The temperature gradient greenhouse was divided into T1 (low: 25°C), T2 (medium: 30°C), and T3 (high: 35°C) zones, and the temperature difference between the inlet and outlet was 4°C to 5°C. The grapevines were placed in a row from the inlet to the outlet and the leaves were sampled at the highest and lowest temperature, respectively.

For quantitative PCR analysis, shoots of ‘Kyoho’ grapevines from rooted cuttings with 15-20 leaves were grown in an experimental greenhouse of Yeungnam University, Gyeongsan, Korea at 25°C/18°C (day/night) and 65% relative humidity. Grapevines were kept in growth chambers (Ilshin Tech., Daejeon, Korea) equipped with a temperature controller and incubated at 25°C and 35°C for 24 h. Each treatment was conducted with three plants. Three to five leaves were randomly collected at 24 h after the treatment. All leaves sampled for RNA extraction were quickly frozen in liquid nitrogen and stored at -80°C until analysis.

RNA isolation from ‘Kyoho’ leaves from three biological replicates was performed using a pine tree method described by Chang et al. (1993) with a slight modification in centrifugation (3,200 rpm for 30 min). RNA quality and yield were determined based on the absorbance at 230, 260, and 280 nm, which was measured using a UV/Vis Nano Spectrophotometer (MicroDigital Nabi, GyungGi, Korea).

cDNA was synthesized from RNA (500 ng) using the GoScript Reverse Transcription System (Promega, Madison, WI, USA), and quantitative PCR was performed with SYBR Premix Ex (TaKaRa Bio Inc., Osaka, Japan). The reaction conditions were conducted by subjecting the samples to one cycle at 95°C for 30 s, followed by 40 cycles of 95°C for 5 s and 60°C for 30 s. The top 10 genes with induced and suppressed expression were selected, and their expression levels were confirmed by reverse transcription quantitative PCR.

Transcriptome Analysis and Selection of DEG

High-quality RNA samples were prepared using the TruSeq SBS v5 protocol, after which the libraries were sequenced using an Illumina HiSeq 2000 (Illumina, San Diego, CA, USA) for paired-end reads. De novo assembly of trimmed reads was carried out using Velvet (Version 1.2.07) and Oases (Version 0.2.08), with k-mer sizes of 61, 65, 67, and 69, a minimum contig length of 200 bp, and an insertion length of 300 bp. The longest transcripts from each locus (k = 69) were selected for assembly based on the putative amino acids obtained from nucleotide sequences. Gene expression was evaluated using the short reads number, differentially expressed genes (DEGs), clustering, and annotation. DEGs due to exposure to high temperature were selected by the DESeq Bioconductor package (version 1.6.0) (Anders and Huber, 2010) with a false discovery rate (FDR) of the Benjamini-Hochberg multiple tests of 1% (p < 0.01) based on read counts (more than 500) and a minimum fold change of 1.5 in at least one pairwise comparison. Gene expression patterns were determined using Pearson’s correlation of hierarchical clustering with at least a two-fold change in expression between the control and treated plants. Genes expressed in the high-temperature treatment were annotated using BLASTN and BLASTX in combination with information from the gene ontology (GO) (Ashburner et al., 2000) and KEGG pathway (Kanehisa et al., 2004). The information retrieved by GO analysis was divided into biological process (BP), cellular component (CC), and molecular function (MF), according to the relevant gene function. The selected DEG were spotted on the KEGG pathway through GO analysis.

Analysis of the Transcriptome in Grapevines Exposed to High Temperature 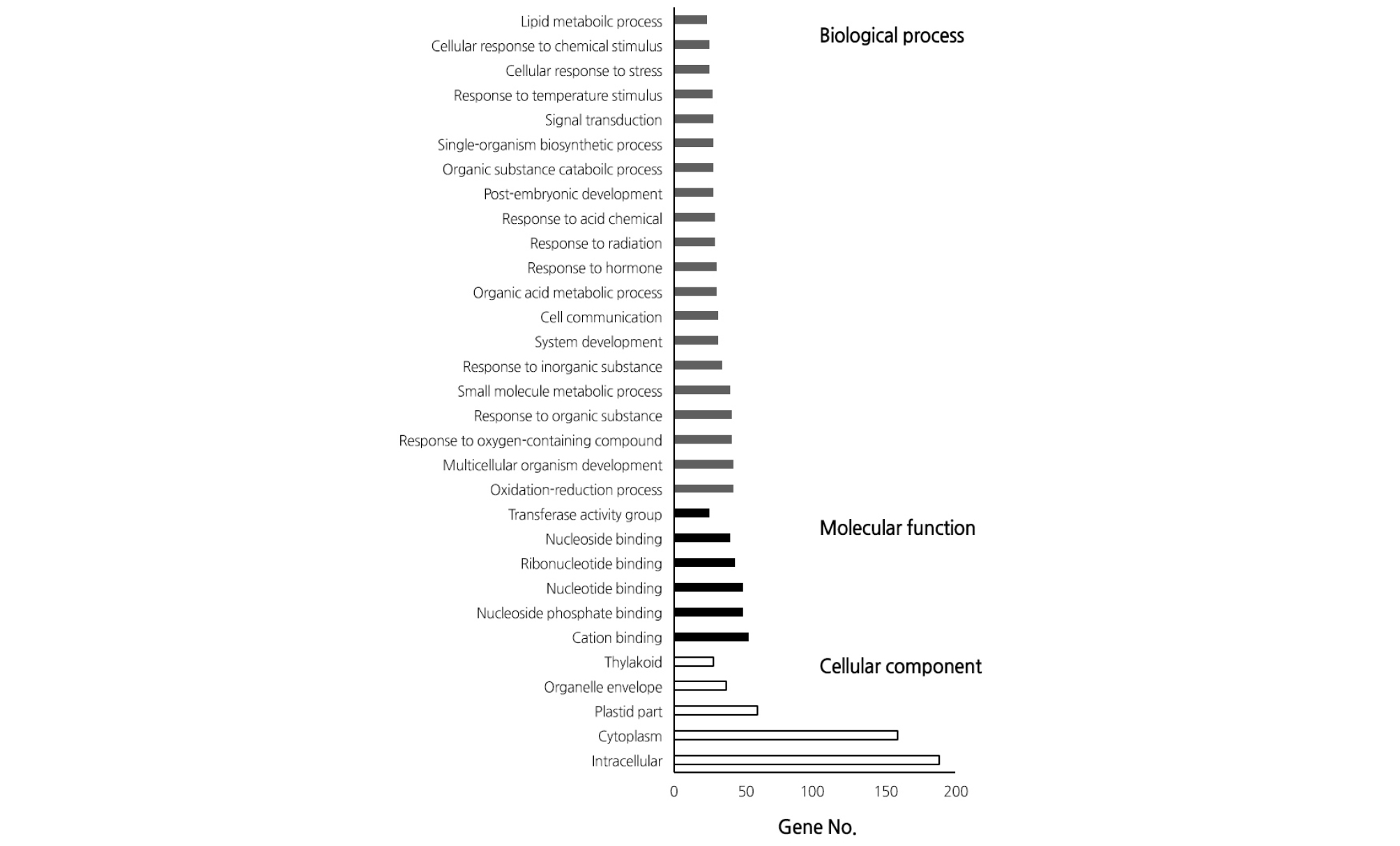 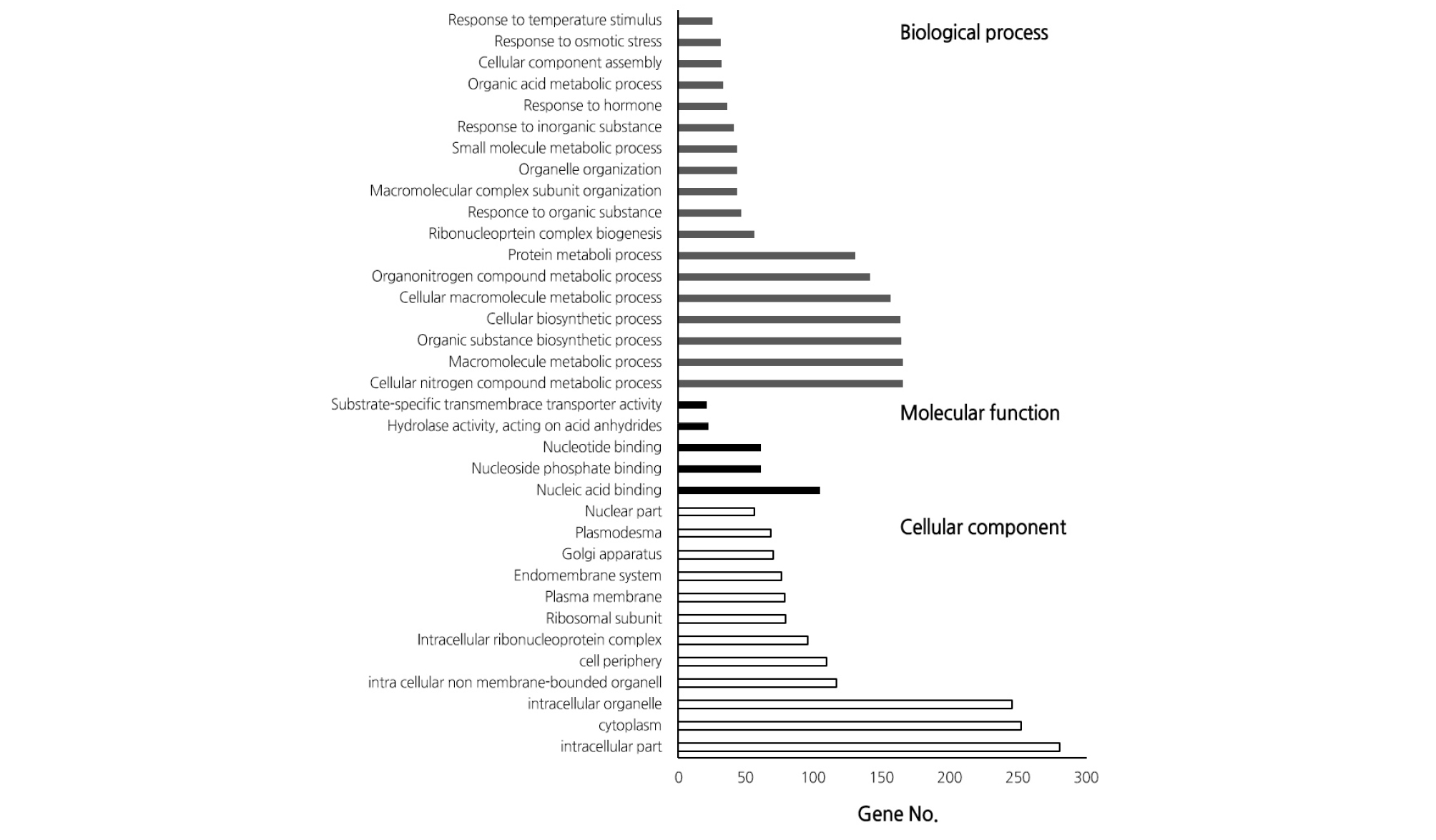 Functional classification of DEGs by GO analysis revealed that most of the induced DEGs were involved in the metabolism of starch and sucrose, linoleic acid, fructose, mannose, carbon, inositol phosphate, histidine, glutathione, glycine, serine, alanine glutamate, and nitrogen, and biosynthesis of secondary metabolism. On the other hand, inhibited DEGs were involved in the metabolism of fructose and mannose, carbon, amino sugars and nucleotide sugars, citrate cycle, cysteine, and methionine, and biosynthesis of amino acids, and sulfur (Fig. 4). These metabolism pathways were mainly clustered with carbohydrate metabolism, amino acid metabolism, and citrate cycle in the KEGG metabolic pathway (Fig. 4). 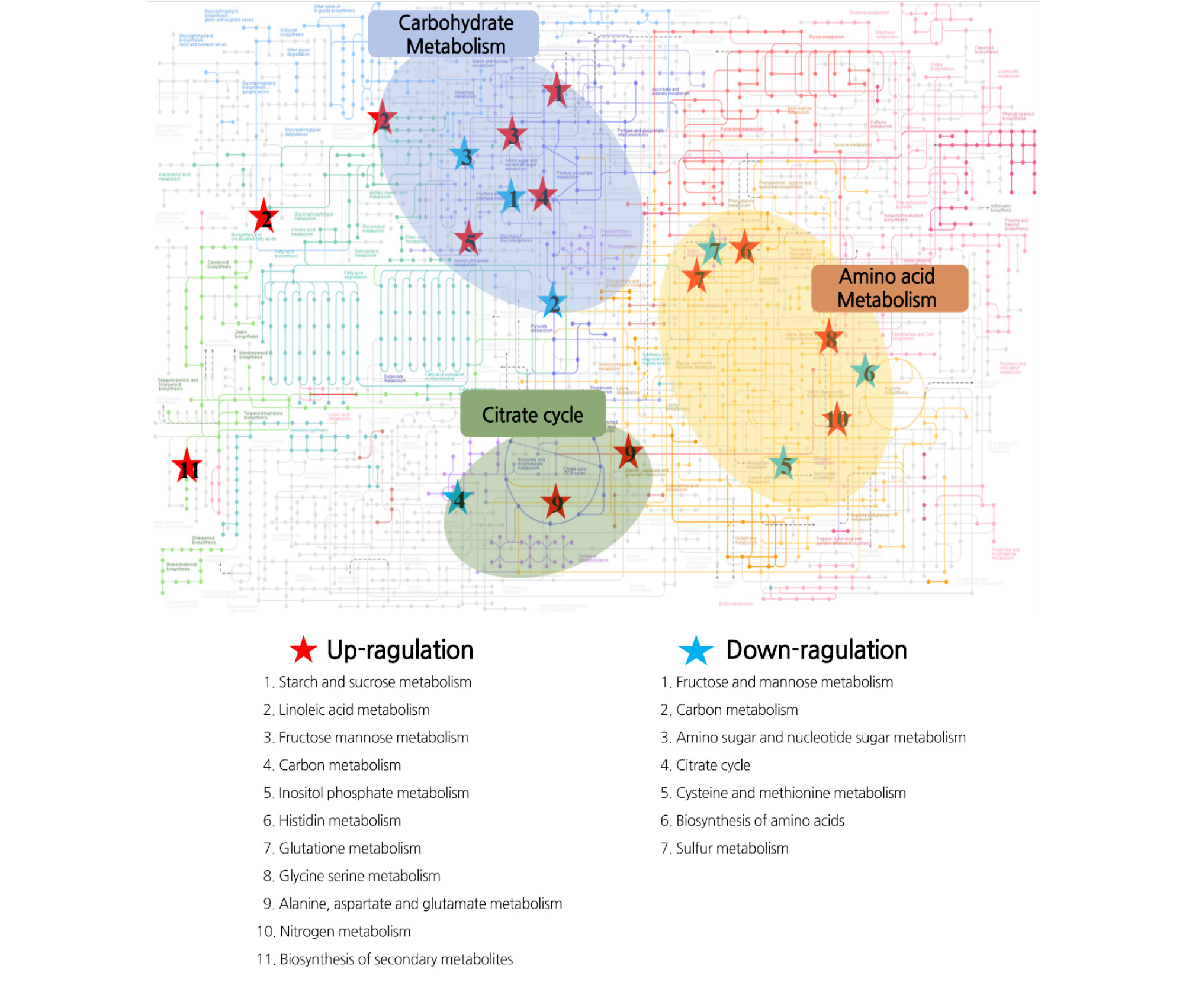 The selected genes were evaluated for their differential expression levels by reverse transcription followed by quantitative PCR (RT-qPCR) using the primer pairs listed in Table 4, which were designed based on the transcript sequences. The results of RT-qPCR analysis using gene-specific primers revealed that the top 10 up-regulated and top 10 down-regulated genes were differentially expressed, and their expression levels were similar to those determined from the transcriptome analysis (Fig. 5). 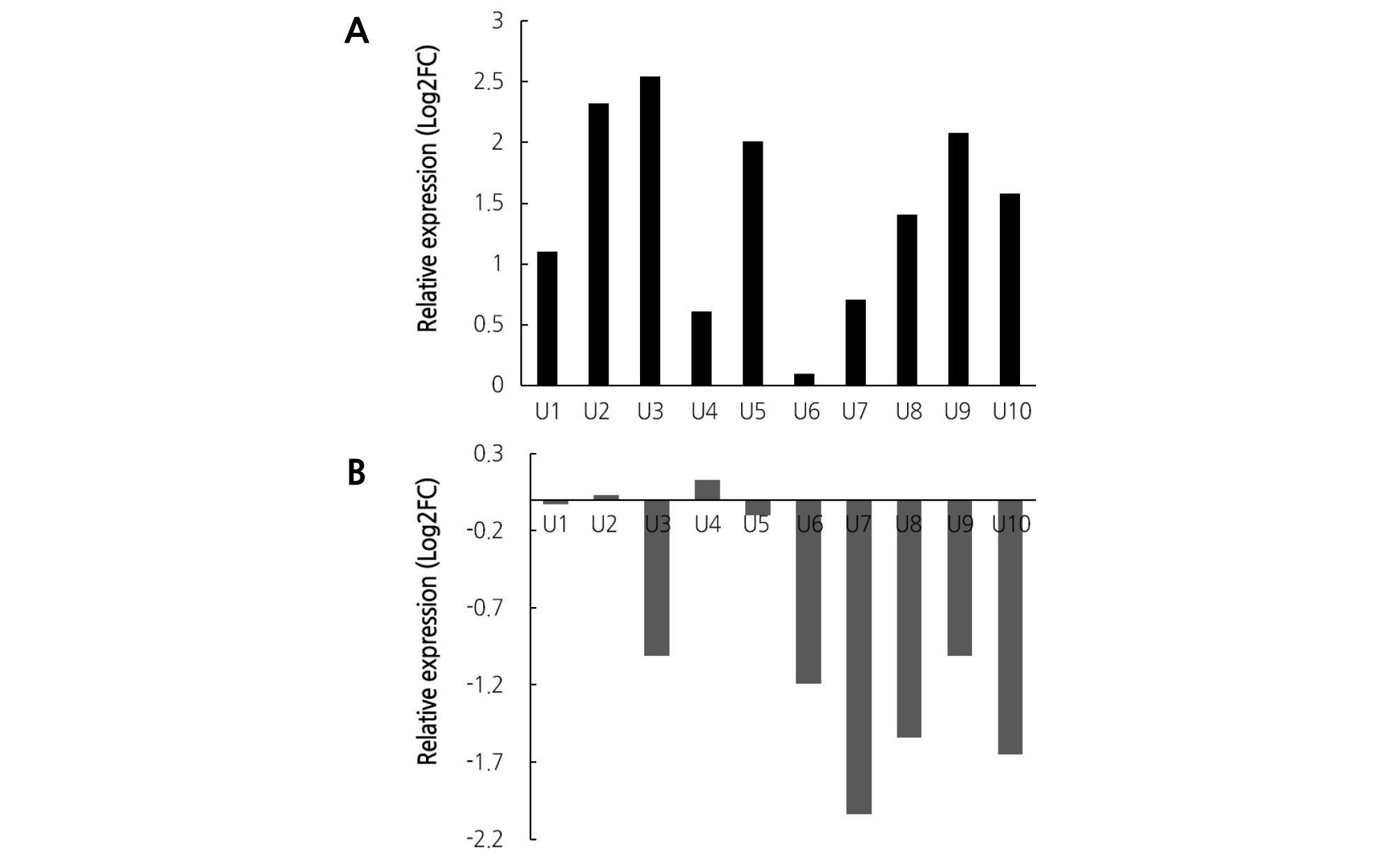 Verification of the transcript levels of up-regulated (A) and down-regulated (B) genes in ‘Kyoho’ leaves in response to exposure to high temperature by quantitative PCR analysis. Log2FC: log2-transformed fold-change value.

Heat shock protein (HSP) genes were also induced by high temperature in this study. The main HSPs include HSP60, HSP70, HSP90, HSP100, and small HSPs, which are classified depending on their structure (Huang et al., 2008). It was reported that expression of various HSPs was regulated in grapevine leaves after exposure to high or low temperature (Liu et al., 2012; Kim et al., 2016, Kim et al., 2017). In the current study, the HSP gene detected abundantly in the transcriptome analysis is considered to be related to its activation in response to stresses caused by exposure to high temperature.

The expression of abscisic acid (ABA)-induced phosphatase 2C (PP2C) gene 3 is differentially regulated by high and low temperatures, as well as by drought and ABA stress (Timucin and Sezerman, 2018; Yang et al., 2018). Consist with these reports, we observed that the ABA-induced PP2C gene 3 is also highly induced in grapevines exposed to high temperature.

OBF‐binding protein 3 (OBP 3) responsive gene 1 is reported to be strongly induced by iron (Fe) deficiency in Arabidopsis thaliana roots (Buckhout et al., 2009); this gene is also related with the response to high temperature in grapevines.

In the group of genes whose expressions are inhibited by high temperature, adenosine-5'-phosphosulfate (APS) reductase 3 is reported to play an important role in the salt stress response (Koprivova and Kopriva, 2008). The expression of tonoplast intrinsic protein 1 in wheat (Triticum sp.) leaves was strongly inhibited in the 4 h drought stress treatment. In contrast, expression of tonoplast intrinsic protein 1 was induced in the 8 h drought stress treatment (Cevher-Keskin et al., 2015). Another study reported that Ferritin 2 in grapevines plays an important role in the stress response (Kós et al., 2008).

The pathogenesis-related gene 1 (PR-1) reportedly enhances the resistance to biological and non-biological stresses (Ali et al., 2018). Induced expression of the tonoplast intrinsic protein1 gene has been reported under stress conditions of nitrogen deficiency in Arabidopsis (Loqué et al., 2005). However, in the current study, we observed inhibited expression of PR-1 and the tonoplast intrinsic protein1 gene in response to high temperature, which indicates that further investigation is needed regarding their role in response to high temperature in grapevines. Contrarily, Zha et al. (2016) reported that a 45°C treatment showed no irreversible effect on the growth of leaves under field conditions; the growth and development of grapes remained constant, and was stimulated in response to heat. The current study demonstrates that most of the genes whose expression was altered by high temperature are involved in the mechanism of response to stress in plants.

This work was supported by Korea Institute of Planning and Evaluation for Technology in Food, Agriculture, Forestry and Fisheries (IPET) through (Export Promotion Technology Development Program), funded by Ministry of Agriculture, Food and Rural Affairs (MAFRA) (617070-5).

Timucin E, Sezerman OU (2018) Thermostability of the PYL−PP2C heterodimer is dependent on magnesium: in silico insights into the link between heat stress response and magnesium deficiency in plants. J Chem Inf Model 58:661-672. doi:10.1021/acs.jcim.7b00655